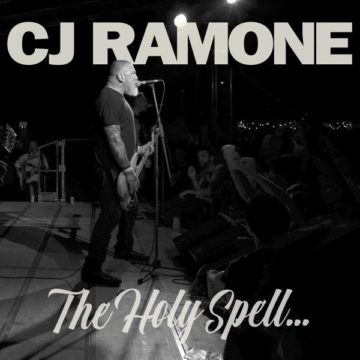 Once a bassist for The Ramones from 1989 to their eventual disbanding in 1996 – appearing on Mondo Bizarro (1992), Acid Eaters (1993), and ¡Adios Amigos! (1995), along with three live albums released between 1991 and 1997 – CJ Ramone has enjoyed a solo career since his 2012 debut release, Reconquista. Now, for his fifth album, and followup to 2017’s American Beauty, Ramone has released The Holy Spell. The album, a collection of twelve hard-hitting, retro-inspired punk tunes, comes ahead of his upcoming summer tour which will take him and his band across North America and Europe.

Starting off larger than life, Ramone kicks The Holy Spell immediately into high gear with “One High One Low”, a punk banger which sits somewhere between classic work from both The Ramones and The Offspring. As the album continues with “This Town” and “Crawling From The Wreckage”, it is clear that Ramone is able to catch a unique sense of melodicism and harmony which often feels absent from modern punk, but is incredibly reminiscent of The Ramones.

Throughout the course of its twelve tracks, The Holy Spell consists primarily of hard hitting punk rock tracks of the likes of “Movin’ On”, “Postcards From Heaven”, and “Waiting On The Sun”. It goes without saying that Ramone knows a thing or two about writing and delivering straight ahead rockers that pull no punches while remaining very catchy. What caught me off guard was just how strong the acoustic ballad, “Hands Of Mine” turned out to be–so much so that it is among the highlights of the album, showcasing a very different side to Ramone along with a far deeper sense of songwriting. That being said, the closing track, “Rock On”–Ramone’s tribute to Agent Orange and Adolescents’ Steve Soto, who passed away in 2018–seems to culminate this acoustic melodic approach with the punk aggression of the rest of the album, making this track among the strongest and most memorable from the record.

While he doesn’t seem to be bring anything particularly new to the punk genre, Ramone’s take on vintage punk with modern trends – in a time where the genre seems too poppy or leaning more in the hardcore direction – feels refreshing and makes for a much more exciting listening experience than most recent punk releases. While The Holy Spell had me revisiting my classic Ramones records, CJ Ramone’s latest release is certainly more than worth listening to and will ultimately leave you revaluating just how integral CJ was to the latter portion of The Ramones career.

A passion for music has always been a part of Gerrod’s life. As a young boy, he was raised on a steady diet of the music from The Chili Peppers, Aerosmith, The Stones, Prince, and others from his mum. Raised in the GTA, Gerrod continued to foster his love for music by attending a wide range of concerts and learning the drums. His unapologetic passion for music has no bounds and has spread to a wide variety of styles, whether it be the 90’s rock that sound tracked his teenage years, the jazz he studied in university, or his newfound love for hip-hop. He recently received his bachelors in music and education from York University and is passionate about writing and reviewing good (and less than good) music. Gerrod is also the drummer and songwriter for a Toronto based rock & roll band, One In The Chamber.
RELATED ARTICLES
album reviewalbum reviewscj ramone
9.0