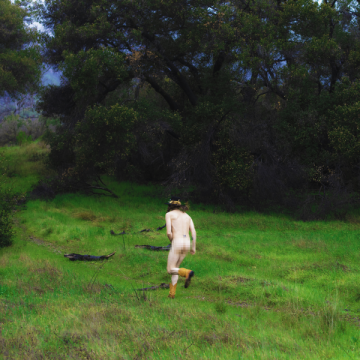 Hippieland is Cisco Adler’s fourth solo album, and his first since 2014’s Coastin’. Adler recorded the album in Malibu and it is very much a solo project in that he plays acoustic guitar, bass, drums, and sings. He gets some help from Martin Estrada on electric guitar. Adler wrote and produced the entire album. It’s very good, and somewhat of a concept album, or at least an album based around a theme of peace and love.

The album is summer. It has a smooth, easy rock, very “Malibu” sound. He creates a great deal of warmth with his music. The arrangements are very laid-back with strong vocals. Give a listen to “Sunday Vibe” (which features G .Love on vocals). It is the perfect anthem for a relaxing Sunday, spent with that special someone. It may sound cliché, but the thing is, it works. Love and Adler trade vocals, which results in putting a smile on your face and a groove in your step.

Clearly Adler longs for the past and the albums that influenced him throughout his life. As Lou Adler’s son, there is no doubt he grew up with the sounds of the Ode label and some of the finest singer-songwriters. The title itself, Hippieland, gives an indication of his state of mind. This is not a psychedelic album, but he does embrace the ideal of the hippie throughout the album. It is an album about love. Adler is posing the same question McCartney once asked about silly love songs. Writing about love, “what’s wrong with that?”. The album focuses on personal relationships, love and domestic bliss.

American singer-songwriter Mike Posner and Australian performer Cody Simpson both make an appearance on one song (the sublime “Somethin’ More”). Simpson (I THINK HE MEANT SIMPSON?) pops up on the lovely “Bumble Bee”. These guests do provide a little variety throughout and their appearances make sense. Adler works their sound into his music and style and unlike some collaborations which are a bit jarring, this all melds together.

Although the entire album is well-produced and beautifully arranged, the highlight is the last song, “Limousine Driver (Live in Hippieland)”. Just Adler and his guitar. A simple, yet beautiful love song that sums up the collection quite nicely.

A great album and released at the right time of year, Hippieland is very easy to listen to and will provide the perfect soundtrack to the summer of 2019