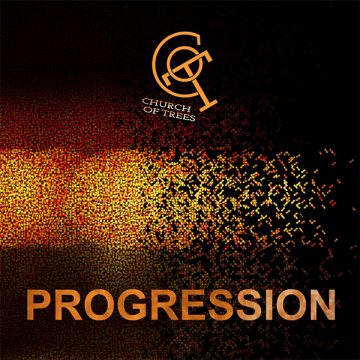 It is hard to believe that Church Of Trees is only four years old, given the quantity (and high quality) of music that has been produced under that banner. Church Of Trees is more of a project than a band. Bernard Frazer is the genius behind the project, and for all intents and purposes, is Church Of Trees, which is not to take away from any of the talented individuals who have performed with him over the past four years.

Progression is a compilation album highlighting what Frazer thinks are the songs that best represent the band. I would not say it is a ‘best of’, as a ‘best of’ would simply be a box set of all of their releases packaged together. But what Progression does do is provide a very good overview of the band, as well as an opportunity for those who have not been converted to the Church to sign up. It is also a beautifully put together package. Don’t download this from Bandcamp, get the CD. Frazer took a great deal of care with the packaging. Each song has full, detailed credits as well as commentary from Frazer. It is a wonderful package.

There is a lot to like about Progression. First, the title is very apt. Frazer, very wisely, organizes the songs chronologically. This means one hears the progression from their first EP (Primitive Creatures) to their most recent album (New Bold Dawn). As an electronic band, one can hear how Frazer grew as a writer and an arranger. He moves from dance electronica to incredible song collages. Listen to “Scream In Silence”, which features the incredible Tara Holloway on vocals. Her vocals are incredible, powerful and emotional, as she sings the strong lyrics. Mix in sound effects and chilling soundbites of dialogue and you have one incredible song. As good as the first EP was (and it is fantastic), nothing comes close to the complexity of “Scream In Silence”, or Church Of Trees’ first international hit “Like Gary Numan” (featuring Dee Dee Butters on vocals).

The second album, The Dark & The Light, paved the way for Frazer’s masterpiece New Bold Dawn. Here, Frazer found his voice, and stepped forward as frontman. He still features very talented vocalists (Tara Hope and Alison Stanton), but he takes lead vocals on several songs and it is much like when Brian Eno stepped away from Roxy Music and his ambient music and sang. Give “End Of Days” a spin. Frazer sounds fantastic. Included in this package is the Rob Preuss version (Rob Preuss also cowrote the song).

Overall, an amazing collection. It would have been nice to include “Let me Out (Rob Preuss Night Mix)” and his cover of Bowie’s “Five Years” (a must to hear), but these are small omissions. Progression is a great compilation, a collection of songs that make sense and sound amazing together. Fans of electronica will thoroughly enjoy this but so will fans of strong, quality music.

I look forward to another compilation in four years and Church of Trees enters into, no doubt, a new phase. Well done, Mr. Frazer.

Born and raised in Whitby, Aaron discovered music through his love of The Beatles. This led to a career in radio, writing for various publications, and ultimately a radio show about The Beatles (Beatles Universe), which ran for over four years. When not immersed in music, Aaron enjoys spending time with the loves of his life -- his wife Andrea, and daughters Emily and Linda (all of whom have an intense love of music too).
RELATED ARTICLES
album reviewalbum reviewsbernard frazer
9.0