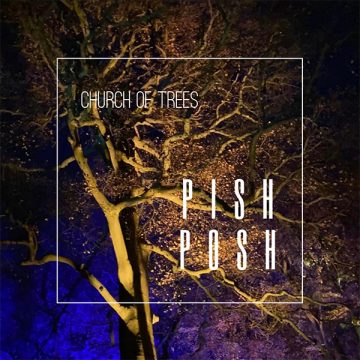 The term “pish posh” is an old expression that basically means something is ‘nonsense’ or ‘something absurd’. Though it is titled as such, that does not describe this new release from Church Of Trees, Pish Posh.

Church of Trees is really the brainchild of Bernard Frazer. Over the past five years, they have released, including Pish Posh, five studio albums and one collection. He has taken the electronica genre and expanded it by creating new sounds.  Pish Posh shows Frazer moving his music into a more sophisticated arena.

Frazer enlists some very stellar guests. Stella Panacci (Kat Rocket, The Angry Moon, Shella) provides incredibly strong and diverse vocals throughout the album. Her vocals are quite distinct and she is able to alter her voice to fit the situation. Compare her vocals on “Waiting For You” and “Just A Little”.  Two very different songs and different vocal performances and she sounds amazing in both. She has a great range, and is a welcome addition.

“Just A Little” is a double highlight on the album.  Frazer, very smartly, includes two versions, his original version as well as the Rob Preuss Mesmerace Mix. They really are very different. Preuss reimagines it entirely and his mix is a little more poppy. It is a perfect choice for a single, while the original version is slower and a bit more brooding. But again, both versions work.

Of course we are treated to Frazer’s diverse vocals as well.  I am a fan of his voice, which is hard to pigeonhole.  Although it is not on the compilation, “Progression” is the name of a Church Of Trees ‘best of’ album. “Sticky” is another stand out track featuring Frazer’s vocals. A bit angry and a bit heavier than what one expects on their albums and D.D. Danahy (Keldari Station) provides strong guitar work that is absolutely perfect.

The album ends with one of the strongest tracks, the lengthy ambient title track. ”Pish Posh” is the perfect way to end, and although an ambient track at the end of an energetic electronic album should not work, here it does. Frazer is no stranger to ambient music, as he placed a similar track on last year’s Pause (“Whales”), but here he goes all out. It is his own take on ambient music and it unwinds slowly, full of melody and sounds. The use of NASA communication just adds to the overall feeling of the track.

The songs here seem more personal and emotional. Jordon Zadoronzy (Blinker The Star), who co-produced the album and plays on it, is a long-time collaborator and his influence is certainly felt. Pish Posh has a bit of a rougher edge to it. On this album, Frazer is able to break out and do what he does best, which is write and create incredible electronic music.

Born and raised in Whitby, Aaron discovered music through his love of The Beatles. This led to a career in radio, writing for various publications, and ultimately a radio show about The Beatles (Beatles Universe), which ran for over four years. When not immersed in music, Aaron enjoys spending time with the loves of his life -- his wife Andrea, and daughters Emily and Linda (all of whom have an intense love of music too).
RELATED ARTICLES
album reviewalbum reviewsbernard frazer
9.0