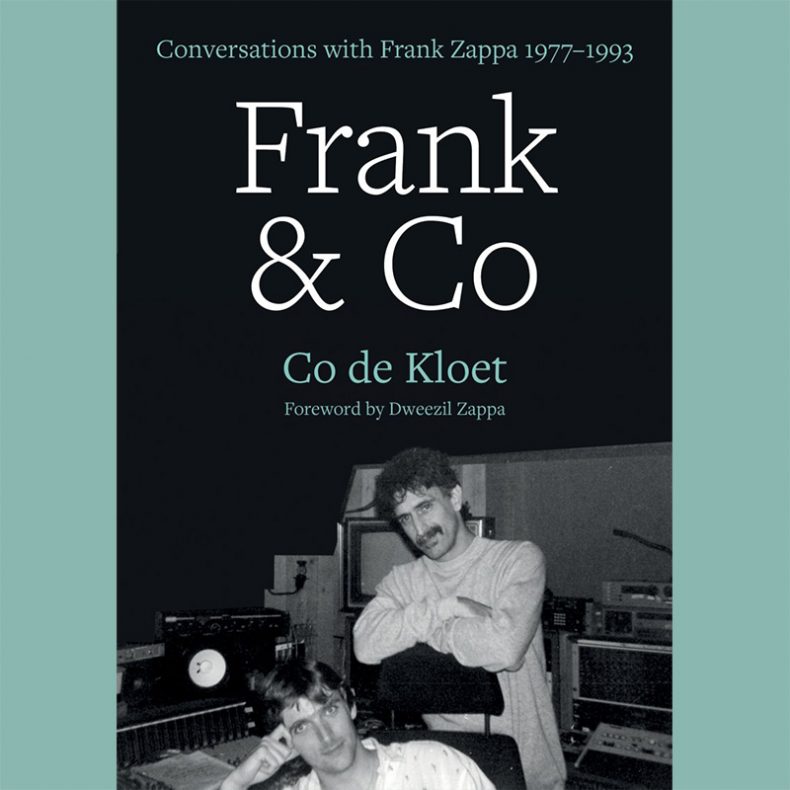 Co De Kloet and Frank Zappa were friends from 1977 through to Zappa’s death in 1993, after De Kloet interviewed him in 1977. Although very young, he knew a great deal about Zappa, and one cannot help but think that Zappa continued speaking to him and became his friend partly due to his knowledge of his music and art. De Kloet is a musician, composer, producer, radio personality and a writer and is known as an expert on Zappa’s music. And that is no short feat, given that in his lifetime Zappa released over 60 studio albums and since his death, an additional 60 have been released posthumously.

The book is exactly as the title indicates, conversations between Zappa and De Kloet. De Kloet recorded many of his interviews, which quickly became conversations. Zappa seems relaxed and very unguarded when he talks about his career and music. De Kloet goes deeper with interviews with artists who performed with Zappa, either as part of The Mothers Of Invention or his latter backing bands, including interviews with Mark Volman of Flo & Eddie, Howard Kaylan of The Turtles, Jimmy Carl Black, Pamela Zarubica, and Don van Vilet of Captain Beefheart. Zappa’s son, Dweezil contributes the foreword and guitarist Stevie Vai contributes as well.

This is not a biography, but because it is compiled in chronological order of the interviews, there is a timeline, as Zappa moves from ‘conventional’ rock music into his jazz and classical works. It is interesting to read his comments about moving from the world of rock to the equally oppressive world of classical. Zappa encounters some of the same biases and barriers in the jazz and classical world as he did in the rock world. He is acutely aware of the lack of radio support for any project and he is clearly disappointed.

Zappa is less aware of the impact he has on his audience and the music world in general. He clearly does not have any sense of his influence and just how much he is adored by a rather large cult following. De Kloet attempts to discuss it, but Zappa dismisses a great deal of the praise or positive comments.

There is a lot to learn about the man throughout the book. Zappa talks about record sales, lack of money, and chart positions. I have been a Zappa fan for many decades and never thought that he cared about chart positions, but I was wrong. He knows how high each album charts and refers to many of his records as flat out “flops”.

It is a fascinating book, one that shows the different sides to Zappa. At times it feels like you are eavesdropping. I am not sure, however, that non-fans or casual ones will get a lot out of it. Knowledge of his 1980s and 1990s albums is a definite benefit and De Kloet is to be applauded for putting this book together. Frank & Co: Conversations With Frank Zappa 1977 – 1993 is an excellent resource and allows one to see, at least partially, why Zappa did what he did during this time period.

Born and raised in Whitby, Aaron discovered music through his love of The Beatles. This led to a career in radio, writing for various publications, and ultimately a radio show about The Beatles (Beatles Universe), which ran for over four years. When not immersed in music, Aaron enjoys spending time with the loves of his life -- his wife Andrea, and daughters Emily and Linda (all of whom have an intense love of music too).
RELATED ARTICLES
booksfrank zappajawbone press