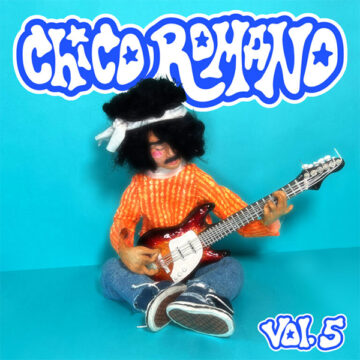 It seems to be a fact that artists who change their monikers once in a while have very wide musical taste and interests, and want to keep those tastes and interests distinct. Yet, very often, thy merge and seep into one other. Sometimes with good, sometimes not so good effect.

New Jersey multimedia artist Chico Romano is certainly one such artist. Formerly known as Professor Caveman, Romano has decided that under his new guise and on his latest EP Vol.5 he will try to take a look at the Brazilian revolutionary sound of the late 60s and early 70s that went under the name of Tropicália (particularly as heard and played by the legendary Os Mutantes), through the bedroom pop concept of left-field pop master R. Stevie Moore.

To many this concept might sound a recipe for disaster, yet Romano manages to hone the six tracks here to some exceptional-sounding pieces. Actually, both Os Mutantes and R. Stevie Moore are artists that were able to combine seemingly disparate sounds into something quite exceptional, and Romano gets quite close to that here.

Formerly a lot of things, including a journalist and a translator, currently a freelance writer living in The Netherlands.
RELATED ARTICLES
album reviewalbum reviewsramp local
8.0