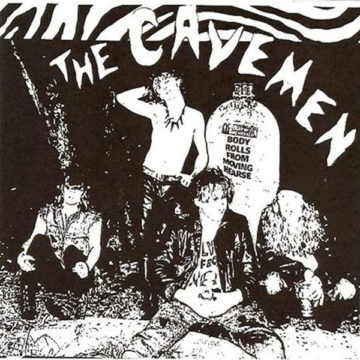 Since their formation in 2013, The New Zealand punk outfit The Cavemen has released a string of singles, as well their debut self-titled record in 2015. Now, after relocating to London and signing with Dirty Water Records, The Cavemen is reissuing their debut album. The 2018 re-release of The Cavemen, while available digitally, is also now available on a limited run of blood-red vinyl pressings and includes two bonus tracks from earlier in their career: “Swamp Thing” and “Juvenile Delinquent,” both of which are currently only available digitally.

Like a sledgehammer to the side of the head, The Cavemen starts with no warning with the opening track, “Mentally Ill.” What is to follow the record’s opening power chords can only be described as an onslaught of aggressive hedonistic lyrics set over the chaotic soundscape of thrashing drums and fuzzy, rough, distorted guitars. The Cavemen plays like a punk band straight out of Los Angeles in the mid 1970s and trades the idols who influenced modern pop punk — Green Day, Social Distortion, and Blink-182 — for the likes of The Germs, The Cramps, and The Stooges. From the good-natured howls of “Stand By Your Ghoul” to the youthful thrash of “Rock ’n’ Roll Retard,” and the incendiary solo on “Fucked In The Head,” it is almost as if The Cavemen has completely avoided any punk influences that came after 1978. As a result, not only does The Cavemen sound like it was pulled out of a time capsule, but it stands as one of the hardest-rocking new punk records I have heard.

While the original release of The Cavemen ran for a whole 19 minutes and consisted of 13 songs. The inclusion of “Swamp Thing” (the band’s debut single, originally released in 2013) and “Juvenile Delinquent” (originally released shortly after) adds an additional five minutes to the record, making them the only songs to surpass the two-minute mark. The benefits of these bonus tracks do not stop there as they also stand as two of the strongest tracks on the record, especially “Swamp Thing,” which feels like a bluesy throwback to some of the darker material off of The Stooges’ Raw Power, and is nothing short of essential for any punk who likes their music to feel like a bomb going off in their headphones.

While The Cavemen is an exciting collection of songs that brings punk back to its golden era, it leaves the listener longing for more; more in the both the sense of a longer album as well as newer material. That being said, it is definitely a strong label debut for The Cavemen and will certainly ignite a sense of excitement for what is in store for this band of classic punk revivalists.

A passion for music has always been a part of Gerrod’s life. As a young boy, he was raised on a steady diet of the music from The Chili Peppers, Aerosmith, The Stones, Prince, and others from his mum. Raised in the GTA, Gerrod continued to foster his love for music by attending a wide range of concerts and learning the drums. His unapologetic passion for music has no bounds and has spread to a wide variety of styles, whether it be the 90’s rock that sound tracked his teenage years, the jazz he studied in university, or his newfound love for hip-hop. He recently received his bachelors in music and education from York University and is passionate about writing and reviewing good (and less than good) music. Gerrod is also the drummer and songwriter for a Toronto based rock & roll band, One In The Chamber.
RELATED ARTICLES
album reviewsdirty water recordsthe cavemen
10