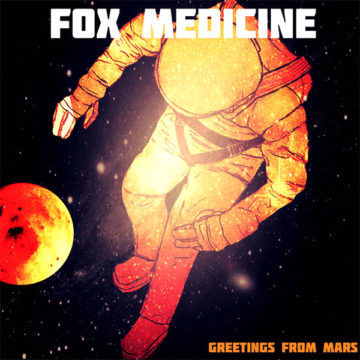 Oregon-based duo Fox Medicine follows up on their debut EP Based on Need with Greetings from Mars, a satisfying, sludge-induced haze of glittery fuzz rock and noise. The duo consisting of vocalist and guitarist Neezy Dynamite and drummer Vanny Keeps has been quite active the last few years, honing much of their sound through relentless touring around much of the Pacific Northwest. On Greetings from Mars, the duo continues to filter their sound through the use of ’70s-inspired punk aesthetic and attitude that lends itself seamlessly to the sludge-fest found on Greetings from Mars.

The record kicks off with “Glitter Alien,” a two-and-a-half-minute track that sees Neezy Dynamite deliver a visceral vocal delivery and a guitar riff that would make devote followers of early Melvins weak at the knees. From here on out, the record refuses to let up as the track bleeds into “Supervillian,” a song that curbs the curiosity of what Kathleen Hanna of Bikini Kill would have sounded like if she decided to join a grunge band as opposed to a punk band. Throughout the record, it’s clear the duo has no problem wearing their influences on their sleeves as the record instantly catapults listeners back to an era in music that some music historians would consider to be the last big musical revolution: the now-infamous Seattle music scene of the early ’90s. The record closes with the three-and-a-half-minute instrumental track “Mental Hygiene” that grinds out satisfying noxious and ugly post punk, and feels almost like a cleansing in bathwater, if the bathwater was filled with bleach as opposed to water. It’s clear the duo is on to something special and perhaps are on the precipice of reviving an authentic take on a genre that changed music.

Carlos Cajina is a documentary photographer and writer based out of Toronto. With a passion for storytelling, his love of photography is equally matched by his passion for music. At night, he moonlights as a freelance writer and music journalist, covering the latest in local and independent music culture for various blogs and outlets.
RELATED ARTICLES
album reviewsfox medicineglitter alien
8.0