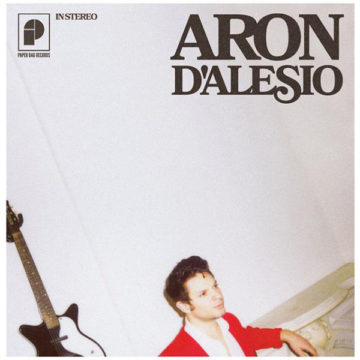 Taking a moment out of his decade-long stint fronting indie rock band Young Rivals, Aron D’Alesio has released his debut solo album. Simply self titled, this record reflects a creative outburst for D’Alesio, indulging for the first time in his music career to the freedom and control of exploring sound territory outside the confines of an established band. The result? A dazzling 50s inspired 13-track LP that serves as a paragon of dreamy R&B melodies and spring reverberating guitars.

The album was written and recorded by D’Alesio, working from a self-made basement studio in downtown Hamilton, Ontario. With the liberty of working on his own, D’Alesio found that the early hours of the morning to be his most creative. “I’d go into the studio every night and I wouldn’t walk away until it was done,” he said. “I quite quickly found that between 2 and 6 in the morning was my most productive time. I’d just get going and it was nice to be free from anything that would take me out of it.” Living in a 9-to-5 society, there really is something mythical about those empty hours of the morning when the streets are vacant and the daily humdrums of life take a momentary pause. The abstract state one experiences alone, being awake at a time when the world is asleep is heard throughout the album’s steady tempo repetition. As the album slow jams through equable tracks such as “Destroyer”, “Wrong End of a Knife”, “A Long Time” and “Run”, it’s easy to get lost in the serene, hypnotising rhythm.

The highlight of the record lies in an unusual position, with stellar track and single off the album, “Diamond Ring”, positioned last on the LP. It seems a shame that such an incredible song is relegated to the B-side, but regardless, it’s a beauty and serves as a real treat to close out the album. “Diamond Ring” embodies the best of D’Alesio’s solo songwriting efforts thus far; a slow dance pop song that’s reminiscent of Beach Boys harmonic overlays melded with the modern garage blues sensibilities of The Black Keys.

Straddling that magical line between retro and new, it’s between the twangy rock’n roll sounds of Buddy Holly and the contemporary croons of Julian Casablancas that D’Alesio is at his finest. Other outstanding tracks off the album “Where You Going To” and “Long Way Gone” also emulate this cue. Aron D’Alesio’s first solo effort began as one of personal growth, with the musician learning to record himself, putting down tracks bit by bit, rearranging parts and designing each individual sound. The result is a sonically lush record that crafts the foundation of D’Alesio sound to something that’s more than just a side project.

Michelle La is a freelance writer based in Melbourne, Australia. She is the Editor of Cat Brain Land, a music blog that loves new and alternative music from Asia and Australia.
RELATED ARTICLES
album reviewsdestroyerpaper bag records
10