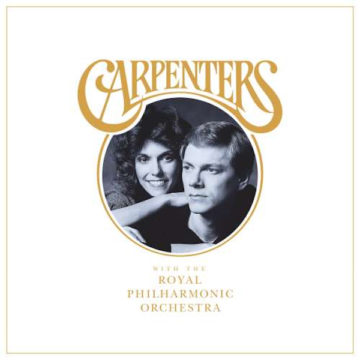 In recent years, there has been a spate of music reissues by acts from the classic rock and pop era of the late 20th Century. Box sets, outtakes, bootlegs, extended jams – just when you think you’ve heard it all, here comes a new(ish) release from the Carpenters: Carpenters with The Royal Philharmonic Orchestra.

Why the Carpenters, and why now? The pristine writing, arranging and producing by Richard Carpenter, and flawless lead vocals and solid backbeat from sister Karen Carpenter were mandatory listening for anyone who tuned in to pop radio in the 1970s. Their place as MOR giants in pop music history seemed clear and well-defined.

Flash-forward over four decades. The Carpenters’ music begins to garner new popularity. Chart success in the U.K. for the 2016 compilation album The Nation’s Favourite Carpenters Songs, and the best-selling 2017 release of the 12LP box set Carpenters Vinyl Collection got the ball rolling. Add to that the nearly six million people who watched this fall’s season opener of “American Horror Story: Apocalypse” – which featured the Carpenters’ 1977 cover of Klaatu’s, “Calling Occupants of Interplanetary Craft (The Recognized Anthem Of World Contact Day)” – and we’ve got a mini-revival on our hands.

All that being said, the time was right for this project. Richard Carpenter, the album’s producer, arranger and conductor, took the original recordings and embellished them with expanded orchestral accompaniment. In many ways, Carpenter is finally fulfilling his original vision for his pop act. In the promotional literature for this album, he notes that the original recording of the song, “‘Close To You” called for a sparse string arrangement, and that he would have liked to have had more players, for a richer sound, had he been given the resources.

The changes in this recording are often subtle. In many cases, fans might be hard-pressed to hear the differences between the old and the new. Songs like “Close To You” do sound fuller, and on many of the other songs, the original recorded sounds appear to be more forward in the mix, which also creates a newfound freshness.

Carpenter has added new introductions to some songs, as well as orchestral and choral passages between others, to varying effect. The Spanish-influenced guitar intro which precedes “For All We Know” is a lovely addition, and the song’s melodic hook (played on oboe) absolutely shines. In other cases, such as “Top Of The World”, the orchestral refurb seems to add little to the original version.

Overall, Carpenters with The Royal Philharmonic Orchestra makes for interesting listening. If the Carpenters are your jam, you will love it. Give the gift of love songs this holiday season!

Bryan Williston has been involved in music since he was a young child. A veteran singer, songwriter, and music educator, Bryan has enjoyed playing a multitude of musical genres in a variety of outfits, over the years. Bryan lives in Whitby, Ontario.
RELATED ARTICLES
album reviewalbum reviewsuniversal music
7.0