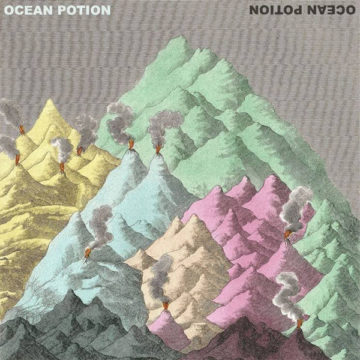 It’s almost been three years since Tame Impala released Currents. For a band that’s always been the forefront of the neo-psychedelic scene, once again they changed its face, leaving a path of imitators in its wake. Among them is Ocean Potion, comprised of Mike O’Brien and Jason Haberman, of Zeus and Yukon Blonde fame respectively.

In Ocean Potion, the two create a cohesive piece littered with sounds, noises, and wonkiness. Built on loops, most of the songs all have that groggy feel, as if the vocalist recorded his vocals waking up from a week-long bender. While some tracks have a disco influence, psychedelia is never strayed from, always keeping distortion and flanging effects somewhere in the song.

“In the Grass”, the song primed as the lead single back in July, might have the most memorable hook; the word “still” repeated over and over on contrasting beats, offering the kind of shoegazing nostalgia popular in the neo-psychedelia scene. With a musique concrete ending with more noises and flonkiness, it’s the song that keeps coming back to me. The two have described it about childhood friendships ending, and that exhausted feel really sells the song. Elsewhere, latest single “Lights Out” evokes that still awake at 4 AM feeling, said by the writers to be inspired by the radio drama of the same name.

Aside from “Grass” (and maybe “10 Out Of 10” for its clever title — it’s the 10th and last song on the album — and its catchy chorus), the songs seem to run together. I don’t know if this was the point, but it creates a cohesive feel, yet something that prevents the other tracks from standing out.

And while Ocean Potion isn’t inherently special, it’s not an awful album. The talent is there, and the duo accomplished what they wanted. It’s perfect for dimly lit, hazy parties where you and your friends are smoking a joint on the couch, and you just want to listen to slow distortion.

King Dawit considers himself the Psychedelic Cowboy. Raised on The Beatles, Queen, The Rolling Stones, and Crosby, Stills, Nash, & Young, you will never find Dawit listening to the same thing two days in a row, whether it be '70s progressive rock or late '60s Baroque pop. Dawit is also a Toronto-based writer, filmmaker, and music producer. Among his favourite writers are Hunter S. Thompson, Terry Southern and Lester Bangs.
RELATED ARTICLES
album reviewalbum reviews
8.0