SPILL ALBUM REVIEW: THE CARNABYS – TOO MUCH, NEVER ENOUGH 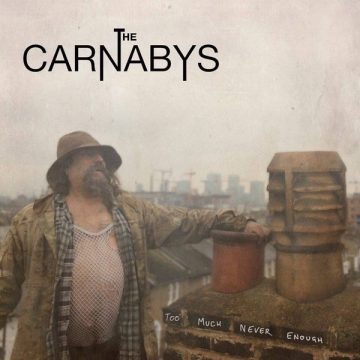 The Carnabys
Too Much, Never Enough
Four Horsemen Records

Nearly two years after the release of its debut album, this next offering from Richmond band The Carnabys certainly doesn’t disappoint. With infectious vigour and energy, this five-piece ensemble crafts a sound unequivocally reminiscent of the likes of Arctic Monkeys and The Fratellis, to name but two, and it would be fair to venture that it represents the pioneering next generation of Indie Pop/Rock.

Jack Mercer, the band’s crowd-rousing frontman and lyricist, commands attention with his original vocal sound and his refreshingly articulate accent – every bit as distinctive as a young Brandon Flowers or Alex Turner! He has just the right amount of attitude to excite without being arrogant or boorish, and throughout the album demonstrates an impressive range.

Belting Fratellian drums and hints of early Sunshine Underground can be detected in tracks like the attention-seeking “Great Dane In The Grave Yard,” whilst others such as “Frayed Feather,” which matter-of-factly references the mistakes of youth, buzz with echoes of Razorlight at its best. The band offers homage to Arctic Monkeys and The Kooks with its well-penned stories in tracks like “Scars and Safety Pins” (my personal favourite) and “Elizabeth.” It is worth mentioning that the boys have released a cheeky tease of a video to accompany this latter track, which can be viewed below.

For all its influences, The Carnabys has crafted this album to offer a unique, more evolved sound, which showcases its considerable talent– and it works!  Definitely one not to be missed!

SPILL ALBUM REVIEW: THE CARNABYS – TOO MUCH, NEVER ENOUGH

The Spill Magazine is a Toronto-based online publication dedicated to covering the independent music scene with a strong focus on our thriving hometown talent. Our writers bring you up-to-date news, in-depth features on musicians and reviews for the latest CD releases. We also travel to the front lines for all local festivals including Canadian Music Week and North by Northeast.Don’t forget to check out our Facebook and Twitter pages for all daily Spill updates.
RELATED ARTICLES
elizabeththe carnabystoo much never enough

by SPILL NEW MUSIC on July 26, 2016
The Carnabys – “Elizabeth” A Spill Exclusive Music Premiere “It’s Elizabeth This Time!” Elizabeth is an energetically riff-infused track that represents [...]