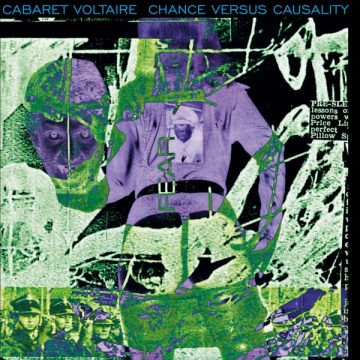 Cabaret Voltaire fans rejoice! You get two releases in one day (this plus a re-issue for the first time on vinyl of early recordings entitled 1974 – 76)! None of us thought this would ever see the light of day but, lo and behold, Chance Versus Causality is arriving from Mute Records on August 30th. I’ll leave the full mythos of this soundtrack to you and Google.

The music was recorded by the Cabs classic line-up of Richard H. Kirk, Stephen Mallinder and Chris Watson in 1979 as the soundtrack for a film by Babeth Mondini. The Cabs would record it live and improvised at their Western Works studio without ever seeing the film beforehand or any instructions from the director. It’s described as similar in vein to their live ambient sets at the time, having “less rhythm, more tape”.

The music is quite experimental. Split into seven ‘Parts’ it could just as easily be served as one long piece. Many sections are replete with ‘found vocal’ samples from film, radio and elsewhere. On the band timeline, their album Voice of America was recorded around the same time as this, and there is shared dialogue from that album’s title track and what is delineated here as “Part 5”. Fans of the band should find that and a few other parallels between the recordings.

A very welcome addition to the Cabs canon of work, Chance Versus Causality is everything we could have hoped for and more. Once you sink your teeth into this, you will find that despite its primitive sound, this is a lush soundscape from a pioneering band. The album is quickly becoming one of the most played in my office. This material isn’t rated lightly. As a fan of avant-garde electronic music, this is as damn near perfect an album that you will find from anyone, anywhere, at any time.