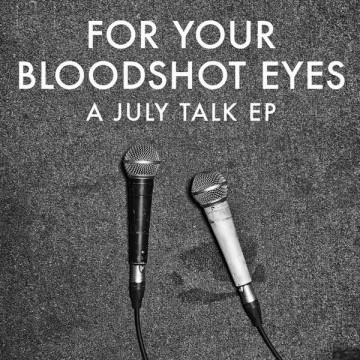 July Talk’s 2013 self-titled debut album crackles with energy and seethes with sexuality, largely fuelled by the tension between band leaders Peter Dreimanis and Leah Fay. Since then, in addition to a vigorous touring schedule, the band has released For Your Bloodshot Eyes, an EP containing three additional songs not included on the original Canadian version of July Talk.

The EP kicks off with the bluesy-rock “Gentleman,” which sets a slower pace, simmering with lines like “we’re so easy to love when we’re down on our knees.” However, “Blood + Honey” and “Uninvited” offer the riffs and catchy hooks that fans of the band have come to expect, with “Blood + Honey” standing out as the most powerful addition to the band’s repertoire.

For Your Bloodshot Eyes serves two purposes: to continue to showcase the band’s exceptional talent, and to reaffirm that they are on the cusp of absolutely exploding in popularity. It is a must-hear.

Alyson is a writer, content marketer and social media manager in Winnipeg, Manitoba. She holds a Bachelor of Arts in Rhetoric & Communications from the University of Winnipeg and runs her own business providing businesses and individuals with copyrighting services, and content marketing strategies and management. When not online she can be found gardening, riding her bike or sipping fancy coffee.
RELATED ARTICLES
album reviewsjuly talk
8.0