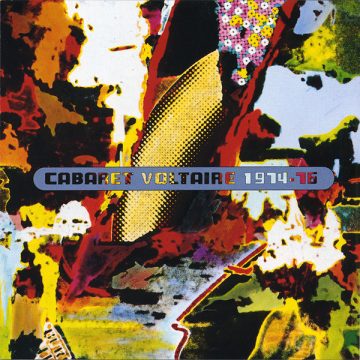 Anyone in love with classic electronic and/or industrial music will no doubt know Cabaret Voltaire. This may be a side that casual fans of the band may have never heard, but die-hard acolytes will no doubt be drooling over this. 1974-76 is a compilation of material recorded by the band in their very early years on a domestic reel-to-reel tape recorder in band member Chris Watson’s attic. Richard H. Kirk and Stephen Mallinder complete the classic lineup for these tracks. For the casual fan this may be a tough listen but for the faithful one, here is a treasure trove worth revisiting.

The band famously took their name from the nightclub, The Cabaret Voltaire, in Zurich, Switzerland that was the epicentre of the early Dada movement. Leading off the album is a track called “The Dada Man” which demonstrates that they took to the movement for more than just a name. Using cut-and-paste techniques, crude electronics, and field recordings amongst other things, it stands up for its age especially in light of the fact that so many artists are struggling to achieve this kind of sound in our modern age. It’s hard to tell if they took any inspiration from The Residents on some tracks like the instrumental “In Quest of the Unusual” or the haunting “Fade Crisis”, but it certainly echoes some of that band’s early work as well. Pure conjecture on my part. One thing is for sure is that “Do the Snake” is a definite nod toward their more rhythmic future.