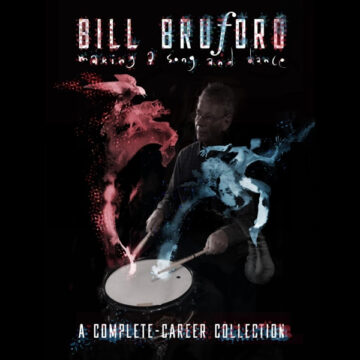 Bill Bruford. The very name conjures up the names of some of the prog rock giants. He was an original and founding member of Yes, and later Anderson Bruford Wakeman Howe (ABWH). He left Yes to join King Crimson and later his own solo projects. Along the way he would play with the likes of UK, Roy Harper and even Buddy Rich. In other words, this drummer has had a very diverse, interesting and brilliant career. This new CD box set (six CDs in total) offers an overview of Bruford’s stellar discography. But Making A Song And Dance: A Complete Career Collection does a little bit more, it also allows listeners and fans to listen to an artist grow and not only develop but also a chance to hear an artist play the variety and genres of music in which he wanted to play.

Bruford’s influence can be felt in bands such as Rush, Gentle Giant, Emerson, Lake And Palmer and many other rock and prog rock bands. His drumming may not have been the focal point, but his style was essential to whichever band or song he was playing. He is equally influential in the jazz world, where he is just as comfortable behind the kit. When he helped found Yes, little did he expect that he would later be playing with the artists that influenced him. The box set starts where his professional career began, with Yes. Three classics kick off the set: “I’ve Seen All Good People”, “Heart Of The Sunrise” and “And You And I”. One track from Anderson Bruford Wakeman Howe (ABWH) features on CD 2 (the wonderful “Brother Of Mine”). 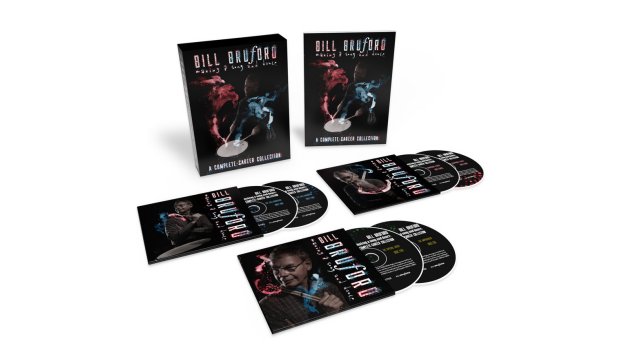 Yes gives way to King Crimson. Bruford drummed for King Crimson from 1972 – 1974, 1981-1984 (so the incredible “Elephant Talk” is included) and 1994 – 1997. Several songs from various eras of King Crimson are here, including “Fracture”, “Three Of A Perfect Pair” and “Heartbeat” and many others. Finally, U.K. is represented with just one song, “Nevermore”, the incredible song from their debut album. Other guest appearances are collected in the set as well, with the Roy Harper tracks, “Grown Ups Are Just Silly Children” and “Hallucinating Light”. Fantastic and unusual songs that are quite nice to have in the collection. Solo Steve Howe and Chris Squire are featured as well as his work with Kazumi Watanabe, Al Di Meola and David Torn. His ability to adapt to the artist and style is, quite frankly, incredible.

Perhaps most interesting is his solo work as Bruford. The albums he recorded in 1978 and 1979 almost serve as blueprints for David Sylvian’s foray into jazz. The albums are jazz with a tinge of prog rock. An album like One Of A Kind (1979) has aged remarkably well, and listening in 2022, one hears how far ahead of his time Bruford was. Simply brilliant. Equally interesting is disc six, titled “The Improviser”. Here fans can listen to his jazz improv with artists such as Patrick Moraz, David Torn, and PianoCircus. This is incredible music that would not be out of line with some of Zappa’s finest. Bill Bruford’s Earthworks is equally as interesting showing a very different side of Bruford and allowing him to show off some pretty intricate playing.

Making A Song And Dance: A Complete Career Collection is an astounding set demonstrating the importance of Bill Bruford but also his stunning body of work. Although there is a lot of music collected here, this set never gets boring. Nor does one get exhausted from listening. It is well put together and an excellent opportunity to recognize Bruford’s remarkable talent and his contribution to the world of music.