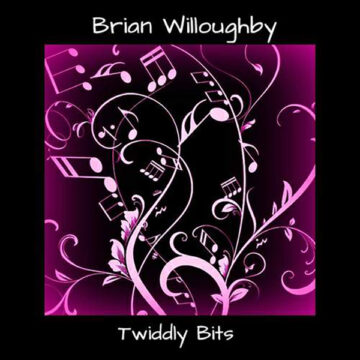 Brian Willoughby may be known for his work with the Strawbs as he has been a longstanding member. However, he has also worked with The Monks, Monty Python, Mary Hopkin and he has also released several brilliant solo albums. Not only that, he has recorded and performed with Cathryn Craig (who happens to be his wife), producing brilliant music that crosses several genres. His most recent album, Twiddley Bits, does that as well. Interestingly, it is his first solo album since 2004’s Finger Crossed.  Twiddly Bits is a 19-track instrumental album with Willoughby playing all the instruments, with a little help from Craig, Danny McGeevy (whistle), Niall Quinn (bodhran) and Dennis Bryon (drums). It is an incredible accomplishment.

Instrumental albums are always a little tricky. Sometimes it is difficult to keep things interesting. Willoughby has no such problem. This album is full of different styles and different sounds. There are melodic guitar-based songs such as “Twiddly Bit” and “Narrow Waterfall” that genuinely move you. Both songs invoke feelings of nostalgia and bring a lump to your throat. Elsewhere, he dives into Celtic Music (“Long Tall Kelly”, a wonderful tribute to a friend) , Spanish music influenced (“Buenos Sueños”, a song dedicated to his friend Nanci Griffith), straight-ahead rock (“Red Steel Tracks”), country (“The Middle”), blues (“White Stratosphere”), folk (“Rosie’s Tale”) and even touches of jazz throughout. In other words, he is not afraid to musically wander into different genres, with guitar firmly in hand.

Willoughby is also very smart to keep the songs on a tight leash. No one song goes over four minutes and in fact, most are under three. This keeps the programme moving and engages the listener. But what is even more engaging is Willoughby’s ability to make his guitar speak. The instrument is his voice, and along with other greats (such as Chet Atkins or Mark Knopfler), the emotion and feeling for each song is not only heard but felt by the listener. What he does is take his time with each song. He builds each piece slowly and methodically, which lulls the listener into each song. It is quite masterful how he does it. Listen to “Peace Pipe” and hear the mood he creates from the first note. It is an incredible piece of music.

It is also an extremely well-produced album. There is a warmth that Willoughby was able to capture, and as such, it has the feeling of a live performance in your living room as you listen (or in your ear buds). But Steven Fearnley has done a brilliant job with the mixing. And what he has to mix is 19 very personal songs to Willoughby. He pays tribute to lost friends, his influences, his home and his family. It is the personal connections to each song that makes this album so very special. This is Willoughby’s audio scrapbook.

Twiddly Bits marks 50 years in music for Willoughby as a professional musician. Fifty years on, and he is still making relevant and important music. Willoughby not only sounds like he is having fun, but he is firmly establishing his ability as a guitarist and a musician. His writing is as good as, if not better, than ever, and his playing is sublime. The title of the album comes from the name of the song he played to audition for Mary Hopkin and was a term fellow Strawbs Dave Cousins gave to Willoughby’s lead guitar parts. In fact it was Cousins who suggested Willoughby to Hopkin and her then husband Tony Visconti. Willoughby not only passed the audition, he has firmly established himself as one of the world’s top musicians.

Born and raised in Whitby, Aaron discovered music through his love of The Beatles. This led to a career in radio, writing for various publications, and ultimately a radio show about The Beatles (Beatles Universe), which ran for over four years. When not immersed in music, Aaron enjoys spending time with the loves of his life -- his wife Andrea, and daughters Emily and Linda (all of whom have an intense love of music too).
RELATED ARTICLES
album reviewalbum reviewscabritunes records
8.0