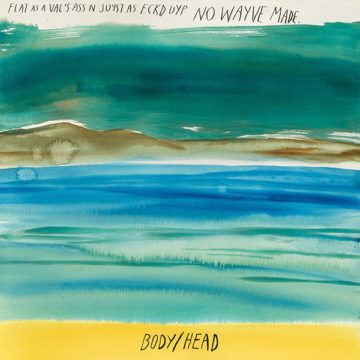 Kim Gordon (ex-Sonic Youth) and experimental guitarist Bill Nace’s project Body/Head is based on improvisation with one another. Their debut album, Coming Apart, was released in 2013 and followed by a handful of shows and touring. Their latest release, No Waves, is a moment captured at one of those shows, live on March 24, 2014 at the Bijou Theater in Knoxville. This concept is an interesting and strategic release by their label, Matador Records. Body/Head is so heavily formed by improvisation and experimentation, this is arguably the best way to truly capture their authenticity and ability. As a band that needs a live setting to express their greatest creativity, this gives them a chance to show different colors than what we heard with Coming Apart.

The three song album’s shortest track is nearly eight minutes long, the longest is over 23. There is no structure, no melody and not much common ground. It’s experimental in its purest form and it captures Nace and Gordon in their true element. Nace’s guitar work spins and swirls around – sometimes weaving together with sweetness and ease, other times colliding and spinning out of control like a derailed freight train. Both Gordon and Nace seem to sing wordless / meaningless vocals (an attribute that fans of Jonsi of Sigur Ros will love). The final track, “Abstract/Actress” begins with a mellow and spacey guitar riff. It slowly builds with Gordon’s vocals and transforms into a distortion laden grunge song. There are definitely ‘waves’ – ebbing and flowing, up and down through highs and lows. The track continues on with synthetic percussive hits, white noise, screeches and halts before a climax not far from sounding like the front of house engineer has lost control.

No Waves is a talented, free-formed, 35-minute slice of artwork. Your opinion of it probably depends on your tolerance and interests in experimental and free-form music. There are hints at a punk and grunge influence and a love for 70’s and 80’s sounds. The noises can be grinding and abrasive – dissonant, to use a fair musical term. Overall, Nace and Gordon do what they do very well. They may not have the most mainstream sound or be the most listenable to some but they do not lack talent. There is an underlying understanding and intelligence in their confident experimentation. Body/Head’s No Waves is a wild and free adventure captured as one artifact, at one time, in one place.

After majoring in business & entrepreneurship at UCSB and traveling the world, Andrew moved to Los Angeles to pursue music and not give up his love for surfing, hiking and yoga. He is also in a couple really cool, up and coming, indie-rock bands in LA - Mothlight & Lone Kodiak.
RELATED ARTICLES
album reviewskim gordonmatador records
10