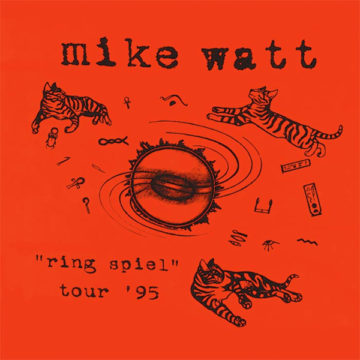 Ring Spiel Tour 95 is a live recording of a supergroup of sorts, a grunge supergroup to be more specific. I don’t like using the grunge label, but this recording comes from 1995, and the group backing Mike Watt (of Minuteman, Dos, and Firehose fame) features David Grohl, Eddie Vedder, Pat Smear. Thankfully someone had the foresight to record several of the performances, including this one from Chicago. This show comes from his 1995 solo tour supporting his then debut solo album, Ball-Hog or Tugboat? While the set list features songs from that album, it also includes some interesting covers, especially the opening song, “Walking The Cow”, which doesn’t so much set the tone, but lulls the audience (as well as the listener) in for an evening of unexpected delights. It rocks, but it should – shouldn’t it. Watt’s voice is in fine form and one can feel the energy of the night. Not many live recordings do that, but this one does. Also evident is the fun and sheer joy of playing. Each member seems to experience backing their musical giant (most of them would not have been in their respective bands were it not for this man). This is a wonderful live document from a long ago time. Watt fans will need this for their collection. For others, it isn’t a bad entry point to his music, but remember this is the tip of a tip of an iceberg of genius.

Born and raised in Whitby, Aaron discovered music through his love of The Beatles. This led to a career in radio, writing for various publications, and ultimately a radio show about The Beatles (Beatles Universe), which ran for over four years. When not immersed in music, Aaron enjoys spending time with the loves of his life -- his wife Andrea, and daughters Emily and Linda (all of whom have an intense love of music too).
RELATED ARTICLES
album reviewssony music canada
8.0