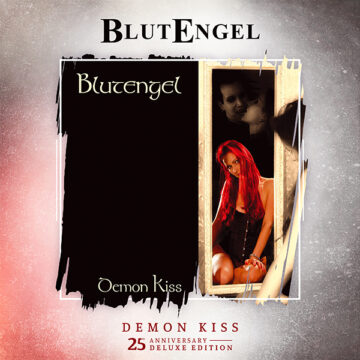 What had originally begun as a side project after German band Seelenkrank parted ways is now a year away from celebrating their 25th anniversary – the Berlin-based dark pop band Blutengel. In celebration of their upcoming milestone, the band has endeavoured to remaster their albums from their formative years beginning with Demon Kiss, originally released in 2004. As Blutengel’s early works have long since sold out since their original release, this is now the last chance for fans to stock up on Blutengel classics from the vault.

The 25th Anniversary Edition of Demon Kiss is released as a two-disc collection much like the original version with additional remixes included on the second disc. Long term Blutengel fans would likely be quite familiar with this album but for those that aren’t, this is an interesting look at the evolution of a band’s sound and technique. Yes, even for a band that has always embraced the gothic crowd of a darkened dance floor, much of Blutengel’s original music could be considered ‘safe’ or ‘tame’ by today’s standard.

As someone who might be considered a newer fan and unfamiliar with this album when it was originally released, it can be stated that the majority of Demon Kiss doesn’t stand out to be noticed. Certainly nothing as iconic as “Reich mir die Hand” or “Asche zu Asche”.

What does stand out on Demon Kiss is their lovely rendition of Shakespears Sister’s “Stay” which is haunting in its church choir vibes. As well, the acoustic version of “Die With You” is equally rich and mournful.

Long term fans will be able to revel in this remastered version of Demon Kiss as well as the other offerings from Blutengel’s early years currently being remastered and released each month until their official 25th anniversary in 2023. It’s a unique look into the archives for this enigmatic band.

Samantha is both a writer and a fan of the arts and has been able to find numerous ways to pair the two. Eager to dive head first into writing for Spill, Samantha is an avid partaker and reviewer of live art in Toronto serving as an editor at Mooney on Theatre exploring live local theatre, she's a photojournalist for Go Globehopper, a travel, dining and tourism blog that focuses on Toronto and abroad and previously for Lithium Magazine. She's passionate about music, theatre, photography, and writing -- not necessarily in that order. She drinks tea more than coffee, prefers ciders over beers, and sings karaoke way too loudly. You can follow her on various social media including Facebook, Twitter, and Instagram.
RELATED ARTICLES
album reviewalbum reviewsblutengel
10