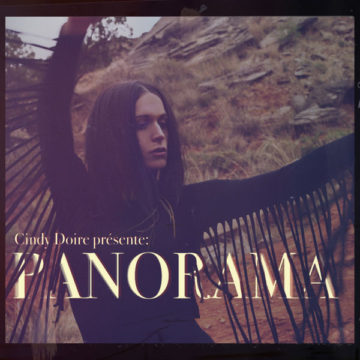 Panorama is Cindy Doire’s fourth solo album. Doire is one half of Scarlett Jane, a fantastic folk duo who have issued two multi nominated folk albums. Panorama is Doire’s third album recorded in French. Over the past few years she has built up an incredible audience in Quebec and New Brunswick and anywhere else where French language records are played.

Panorama was produced by Mark Howard, who has worked with Bob Dylan, Daniel Lanois, U2, and Tom Waits. Howard uses his experience and skill to bring out some interesting sounds from Doire. On this album, she is not content to be a folk artist. Rather, this music is ambient-folk music.

Howard layers Doire’s sounds, her voice and music. This creates an angelic sound to his beautiful album. Doire’s voice is in fine form and the doubling up of her vocals, allowing her to harmonize with herself produces an astounding and unique sound. This is not like Enya, but rather a dip into one’s soul.

But it is not all folk based music. Listen to the first single off the album, “Danse”. Twangy guitar, and heavy production make a presence. Not a dance song exactly, but it is a wonderful song full of twists and turns. Again, her voice dominates the song. Another highlight is the closing track, the moody “Lenvoi” (“The Shipment”). A short but powerful song. Again, the song might have its roots in folk, but it is pure Tom Waits territory and has a lasting impact on the listener.

I will be honest, I don’t speak fluent French, but it does not matter. Doire is able to convey the emotion of the song with her arrangements and her voice. You don’t need a translation to fully understand “Désirs Sans Remords” (“Desire Without Remorse”). All one needs to do is listen and the meaning comes seeping through the music and instruments.

Doire is a star in Quebec and France. This speaks volumes about English speaking Canada not playing French language records. This is a shame because a great many artists go unnoticed and that means a great deal of brilliant music is not often heard by English Canada. This can be rectified with the issue of this album. Panorama is a consistently strong, cohesive album. It is extremely well produced and well performed.

Doire has created an album built on folk music and pure emotion. It is an album that will stay with you long after the needle has run out of the groove.

Born and raised in Whitby, Aaron discovered music through his love of The Beatles. This led to a career in radio, writing for various publications, and ultimately a radio show about The Beatles (Beatles Universe), which ran for over four years. When not immersed in music, Aaron enjoys spending time with the loves of his life -- his wife Andrea, and daughters Emily and Linda (all of whom have an intense love of music too).
RELATED ARTICLES
album reviewsarté boréaldanse
9.0