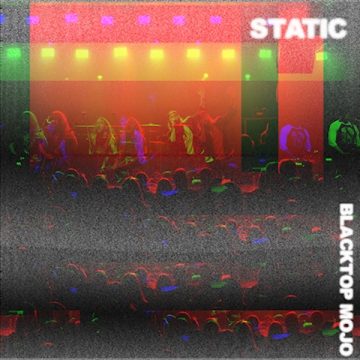 Following a truly successful sophomore album, Under The Sun, released in the fall of last year, Blacktop Mojo have returned with a four-track EP, Static. Given the Texas hard rock band’s rapidly growing status as a band to watch out for among the current rock revival that is sweeping across North America, it is no surprise that Static marks yet another strong, albeit brief, moment in the band’s creative output.

Opening with “The End”, Blacktop Mojo kicks things off with a mid-tempo but heavy slow-burner, that grows from a quiet and mildly ambient verse to a truly explosive chorus full of thick, distorted guitars and soaring, unrestrained vocals. As the song continues to develop, the melodic guitar work from the first verse is seamlessly combined with a number of distorted lines before erupting into an incredible solo. “Watch Me Drown” follows in tone with “The End”. Both tracks feel like a departure from the riff-heavy material the band is known for on previous releases, and embraces a slightly more dynamic songwriting style that feels very much influenced by ‘90s grunge and hard rock. In this case, the contrast in quiet to heavy between verse and chorus, paired with killer guitars and strong vocals, feels very reminiscent of Alice In Chains.

The latter half of Static continues with primarily acoustic-driven ballad, “Leave It Alone”, a song full of muted electric guitar lines hidden behind the band and acoustic tone – again, very Alice In Chains – until the track, out of nowhere, truly sets off with a larger than life solo and final chorus that brings the ballad to strong climax before returning to the lower energy of the intro. The band brings Static to a close with another mostly acoustic ballad, representing a further shift in tone, style, and songwriting for Blacktop Mojo.

Static, in just four songs, proves to be the most dynamic and introspective release from Blacktop Mojo yet. The surprisingly experimental EP is a definite departure from expectations as the band flexes their songwriting chops and displays their musicianship and performance power in a different manner. Regardless, Static is a strong release from Blacktop Mojo as the band continues to move forward sonically.