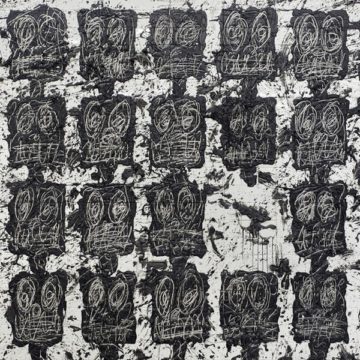 If you drop Black Thought’s name (born Tariq Trotter) anywhere within most musical circles, the most common descriptor that follows is “underrated”. The most important thing that you’ll learn from Streams of Thought, Vol. 1 is that there is no adjective more inapt in describing the legendary MC because he is just that, a legend. The intention may be to celebrate a true pioneer of the genre, but to call him underrated only serves to underappreciate the incredible lyrical talent the man has; Streams of Thought, Vol. 1 is, as has always been the way, a reminder of the raw and ferocious talent the founding member of The Roots and fearless MC has been fine-tuning for almost 40 years.

Though there are some powerful moments in the form of collaborations on Streams of Thought, Vol. 1, most notably that of Rapsody on “Dostoyevsky”, it is Black Thought himself who is the standout on every single one of the five tracks on this EP, which clearly is part of an upcoming set of releases. Just as it was Black Thought who almost single-handedly broke the Internet with his ten-minute freestyle (yes, you read that correctly) on Funk Flex’s radio show on Hot 97 earlier this year. There is a peerlessness to his delivery, a determined passion, and an absolute relentlessness to his ability to spit lyrics that show both his quick mind and his authenticity in equal amounts. Always humble but never afraid to challenge, Black Thought has clearly set out to remind listeners with Streams of Thought, Vol. 1 that he is as important and talented now as he ever has been; the EP also feels something like a snapshot of his career, from his early beginnings in Philadelphia, the city that he has always stayed true to, to the present day. In all, it is a must-listen for any fan of lyrical rap, or for any of you young mumble-rap fans who can’t possibly understand what you’re missing out on. Underrated the man is not…’cause you can’t be underrated when you’ve never been anywhere but top of the pile.

Br. lives in southern Ontario, grew up on The Beatles and The Journeymen, spent his adolescence immersed in grunge, and his adulthood in British alternative. His greatest joy is seeing his son dance and grow into his own appreciation of the indescribable joy of music...
RELATED ARTICLES
album reviewalbum reviews
8.0