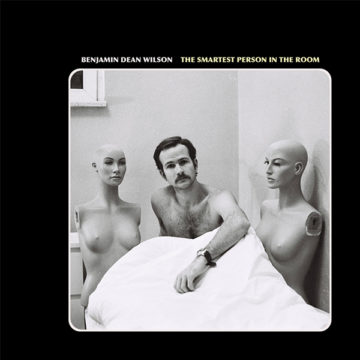 Benjamin Dean Wilson
The Smartest Person In The Room
Independent

Songwriters who focus on storytelling have a mountain to climb in every song. To effectively weave a tale writers need descriptive language, effective imagery, and novel concepts. When you add the restraints of melody, rhythm, and rhyme scheme, you intensify the challenge a couple hundred times over. It may seem impossible, but masterful artists like Bruce Springsteen, Bob Dylan, and Craig Finn of the Hold Steady, have found a way accomplish this task. Unfortunately, Benjamin Dean Wilson falls short in painting a poetic portrait on his newest release The Smartest Person In The Room, though his musical ability picks up some of the slack.

Benjamin Dean Wilson’s poetry on The Smartest Person In The Room is stuffed with banality. Plain language describes mundane events on each of his longwinded songs. Some artists, like the Mountain Goats, are able to use seemingly banal details to great effects in their stories, but the lack of a pay off in Wilson’s songs makes the listening experience feel like a chore. Literary device could add some excitement but Wilson avoids them, which leaves the tunes off of The Smartest Person In The Room sounding like run on stories from somewhat boring people.

Wilson’s compositions are impressive. Musically, his songs are winding roads which are far from predictable. The time changes in “Mr. Paranoid, Lizzy, and Her Family,” and tempo changes in “Vitamin Supplements” are standout moments on the record. Wilson sounds his best when harmonizing with the female vocalist who is featured on the title track. However, the female vocals on “A Difficult Decision For Ronny Giovonni,” only aid in digging a song about a typical chauvinist into a hole of tackiness.

Benjamin Dean Wilson should be commended for his risk taking. He makes an attempt to write songs and poetry akin to that of lyrical legends. Yet his concepts are too simple, his lexicon is either too shallow or just not on display, and he fails to find a new and creative way to draw listeners in. With some more life experience, or time spent studying legendary songwriters closely, Wilson could eventually make an epic album. For now The Smartest Person In The Room settles for par.

The Spill Magazine is a Toronto-based online publication dedicated to covering the independent music scene with a strong focus on our thriving hometown talent. Our writers bring you up-to-date news, in-depth features on musicians and reviews for the latest CD releases. We also travel to the front lines for all local festivals including Canadian Music Week and North by Northeast. Don’t forget to check out our Facebook and Twitter pages for all daily Spill updates.
RELATED ARTICLES
album reviews
10