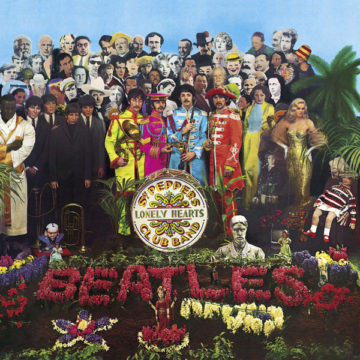 Sgt Pepper’s Lonely Hearts Club Band may not be the best album ever made, may not even be the best Beatle album ever made (my nod goes to Revolver, but I am open to debate), but Sgt. Pepper’s Lonely Hearts Club is the most important album ever made.  There is no debate.  And after numerous anniversaries over the years, when the album was never fully explored, Apple and The Beatles got it right with this Anniversary Edition to celebrate the 50th anniversary of this landmark album.

Why is it the most important album ever made, you may be asking?  Well, although it is near impossible, you have to forget the last 50 years of music and try to imagine the musical landscape pre Pepper.  John Peel, the great British D.J. once said that “The Beatles are our leaders”, and he wa not wrong.  They broke new ground with every album they made.  Now, back to 1966, rock was still growing and although there were some incredible albums made that year (and prior years), The Beatles forged ahead with an album full of sounds, lyrics, and for the first time, care in the packaging.

Sgt Pepper’s Lonely Hearts Club Band, was the first album to have the lyrics printed for the fans, it had a give away (a sheet where the fans could cut out Pepper material), and the first designed inner sleeve.  And look at the album cover.  Never before had an album sleeve been created with such care (costing EMI atleast $3000.00 at the time, which in 1967 could have bought you a house).  But it was the music that was the game changer.  I think it is also important to note that this was The Beatles’ eighth album in four years, and only three years separate this album from A Hard Day’s Night.  Astounding.

The Beatles did things with music on that album that nobody had done before.  All of the songs ran together, forming two solid sides of music.  And the Beatles broke the barriers of rock albums.   Of course there was plenty of avant garde albums prior to this and yes The Velvet Underground, Zappa and Dylan were all doing their thing, but none of their work had the impact or consistency of Pepper.  The Beatles created an album with a definite beginning and a definite end, like a movie, or book.  The concept of Pepper was not so much a story album (leave that to The Who with their rock operas), but rather the chance for The Beatles not to be Beatles  They were freed up from the constraints of the image of The Beatles to be another band, and as such do whatever they wanted.  This gave the collective world sounds they had never heard before, arranged within a rock format.  It was the creation of The LP.  No singles were even issued off the album.  No, it was an album, an entity on its own.  Brilliant. 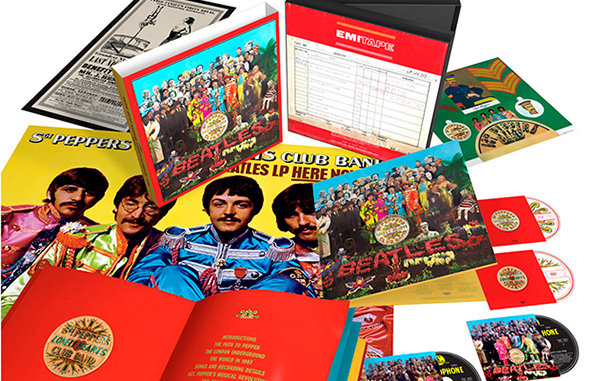 The songs themselves are now part of our collective DNA.  A musician friend of mine once said, there are two types of musicians in the world, those influenced by The Beatles, and liars.  Good joke and possibly true.  Rock bands around the world, that were initially inspired to pick up guitars when they saw The Beatles on Ed Sullivan, were now trying to keep up.  Bands everywhere were now trying to capture the spirit of this album, and the ripples can still be felt today, especially in the ‘indie’ world of rock.

Listen to McCartney’s bass throughout the entire album, but especially during  “Lovely Rita” (and thanks to the new masters/remix you can hear his bass, more on that in a minute).  But again, the songs and their structure are breathtaking, from the opening crowd murmur of “Sgt Pepper’s Lonely Hearts Club Band” to the final piano note of the classic “A Day In The Life”, music fans are treated to everything from rock, to psychedelia, to world music (I think Harrison is the father of what we now call “World Music” with songs such as “Within You WIthout You”  By the way read the lyrics to that one and ponder that he was all of 24 when he wrote it), to British Music Hall to almost classical.  It’s all there.

The new version of the album contains remixed and remastered versions of the original album,  Giles Martin, son of original producer George Martin was given the task..  Once again Giles knocks it out of the park (his work on Love and The Beatles At Hollywood Bowl, as well as McCartney’s New is simply stunning).  He does not remix it to the point where it is distracting, but rather accentuates aspects of the album that may have been buried before.  Ringo has recently said “now you can hear my drums” and he is not wrong.  The drums come through like never before, as do the vocals. The backing vocals in “Lovely Rita” have never sounded so good, as does Lennon’s lead vocals on “Being For The Benefit of Mr. Kite”.  It is an awesome production and even if you think you know the album, give the new version a spin (it sounds brilliant on vinyl) and hear Pepper like you never have before.

The new version comes in several formats, single CD, double CD, double vinyl, download and the wonderful box set.  Anthology 2 teased us with some outtakes from the the album, but here you will get two CDs, over 30 songs, never before heard.  Listening to the album in the making, is a chance to hear the creative process.  And contrary to several books about The Beatles, in the little studio chatter left on the tape, you can hear the four Beatles collaborating, enthusiastically, on the songs.  And encouraging each other to bring out the best.  Not only are the outtakes listeneable, they are downright enjoyable.  The set also includes DVD and Blu Ray documentaries.

The packaging of the set is incredible.  Detailed liner notes, notes about the sleeve, and with the box set posters.  What more can you ask?

This is the set fans have been waiting for and it is the set that should set the record straight.  Over the years, one tends to forget the brilliance of this album, but with the new fresh sound, Sgt Pepper’s Lonely Hearts Club Band comes alive and sounds as fresh in 2017 as it did five decades ago, quite the accomplishment.

When The Beatles gave up touring in 1966, the general thought was they were finished.  Every band toured, and performed.  Then The Beatles did not release any new material for five months, and again this had not been done in the Rock world of the time (consider today when five years between projects is not only acceptable but applauded). When The Beatles did surface the first thing they issued was the classic, and best single of all time, “Strawberry Fields Forever” and “Penny Lane”.  Both songs had been intended for the Sgt Pepper’s Lonely Hearts Club Band album, but EMI were pressuring The Beatles to issue new music, so that single was issued.  And it did not do as well as other Beatles singles in the past.  Again, the thought was they were done.  Then, June 1, 1967 hit and The Beatles came out with this album.  It took an unprecedented 700 hours to record (remember their first album, Please Please Me was recorded in one day) and The Beatles changed the music world, and perhaps the world, forever.

Born and raised in Whitby, Aaron discovered music through his love of The Beatles. This led to a career in radio, writing for various publications, and ultimately a radio show about The Beatles (Beatles Universe), which ran for over four years. When not immersed in music, Aaron enjoys spending time with the loves of his life -- his wife Andrea, and daughters Emily and Linda (all of whom have an intense love of music too).
RELATED ARTICLES
album reviewsapple corps ltd.the beatles
8.0