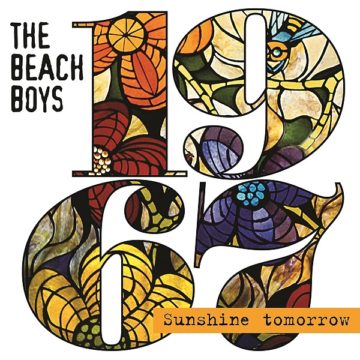 Following the devastating mental breakdown of Brain Wilson during the Smile sessions in 1966 and ’67, the band seemed to be in serious trouble. It’s principal songwriter, arranger and producer had flipped out. It was now up to the other Beach Boys to step up and take the lead. Carl, the youngest of the three Wilson brothers became the most likely to become the leader of the directionless Beach Boys. Though he didn’t possess the musical genius that his elder brother had, he was wise for someone of 20 and had by far the best voice in the group. Carl, the band’s secret weapon, would be the key ingredient to the band staying together through the rough times that would come.

1967: Sunshine Tomorrow, a new two-disc compilation, allows the listener a glimpse at the transition of Brain Wilson’s Beach Boys becoming a more democratic version of the band, in which Carl was the backbone.

1967: Sunshine Tomorrow features the original full-length LP, Wild Honey, a lo-fi R&B album, dominated by Carl’s soulful pipes. The unpolished, back-to-basics vibe of the album still comes through, despite this version being in stereo. And of course a bunch of rare goodies for all you Beach Boys fans. (Non-fans can go to fellate themselves! Harsh? I think not.) After the first 11 tracks on the first disc, we’re blessed to hear various outtakes, instrumentals and studio banter from the band during the Wild Honey sessions.

Disc-two draws from several sources, most notably the Smiley Smile sessions and Lei’d in Hawaii, a previously unreleased live album recorded in late summer of 1967. The Smiley Smile tunes are outtakes and alternate versions to the songs that made the album. However, it’s the Lei’d in Hawaii songs that make a bigger impact. Looking through the album tracks you may think otherwise since they’re mainly hit singles from previous albums. These versions, however are played in updated, Wild Honey-esque arrangements. The arrangements may not be as recognizable as the originals, but they bring a new flavour to “Help Me, Rhonda” or “You’re So Good to Me” that is enormously refreshing.

It’s on these tracks where we see the band performing old songs, with a new energy, one that is their own, and not just Brian’s. It’s the beginning of what would be second wave of creativity in the band, this time from the other Wilson’s, Carl and Dennis who composed the bands best material in the late ‘60s and early ‘70s. It all starts here, on 1967: Sunshine Tomorrow.

As a child growing up in the suburbs, Ryan found music as a way to soothe his boredom. After first hearing AC/DC at the age of 10, he was hooked on music. Tracing its roots to the ‘50s, he became obsessed with Elvis, Buddy Holly and Chuck Berry. Somehow that led to grunge, then psych-rock, then jazz, etc. The list goes on and on and his collection of vinyl records continues to grow.
RELATED ARTICLES
album reviewscapitol recordsthe beach boys
8.0