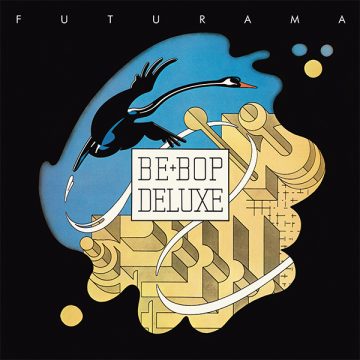 It’s always a happy time when anything new by Bill Nelson comes out. He has been releasing albums for decades now on his own independent label(s). They are swirling creations that are still filled with guitar heroics and melodies that make you swoon.

He is never one to look back. Just ask him. He doesn’t like to linger too long on anything because life is short and he has a soul full of music that needs to be released. His fans though are different animals. Some love to linger on certain periods of his career and not move forward. Prior to him making the move to get on social media, there were old fans who didn’t know he’s been steadily producing music into the 21st century. Fortunately for them, Esoteric Recordings have unleashed a massive 3 CD \ 1 DVD set to celebrate Be-Bop Deluxe’s album, Futurama. BBD was Bill’s band from the ‘70s for those unfamiliar. They released five amazing studio albums in their time together, Futurama was the pivotal second album that solidified the classic lineup of Bill, Charles Tumahai on bass, and Simon Fox on drums. Later albums would add Andrew Clark on keyboards to round out the final roster. 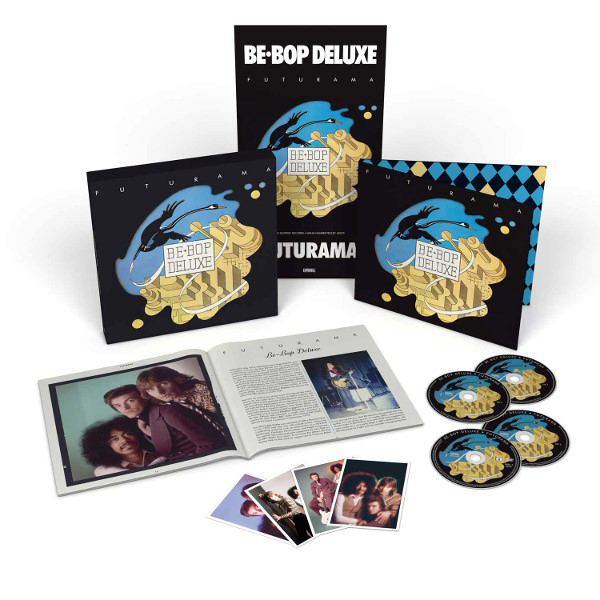 The classic mix of the album spans the first CD along with a single version of “Between the Worlds” and the B-side track, “Lights”. Disc 2 is a brand-new stereo mix of the album which may prompt a “so what?” type response because so many of these just add bass and boost the volume. It’s evident from the time you start playing that care was put into this new version and elevates this album beyond the mythical plateau it has always resided on. Gone is the somewhat flat sound of the original to having the drums sounding crisp, the vocal harmonies having better separation and the guitar…oh, the guitar just makes you shake your head in wonder as to why Bill isn’t mentioned in the same breath as Eric Clapton or Jimmy Page.

Disc three and the DVD are what gives this set the bang for the buck with the third CD boasting an unreleased four-track BBC Session and a “thought to be lost” seven- track BBC concert recording of the band from May 1975. The DVD includes a new 5.1 surround sound and stereo mixes from the original multi-track tapes by engineer Stephen W. Tayler with three bonus tracks. There is video of the band performing “Maid in Heaven”’ and “Sister Seagull” from an appearance on the U.K.’s legendary television program The Old Grey Whistle Test and a hereto unseen promotional video for “Maid in Heaven”.

Add to all of this a lavishly illustrated 68-page book with many previously unseen photographs and an essay of recollections by Bill Nelson, a facsimile promotional poster for the album, replica track sheets, and postcards, this set is value for money. It’s worth a look back.

Michael Mitchell's love of music started at an early age and slowly became an addiction that courses through his veins to this very day. It is guaranteed that if you are in his proximity, he will try to get you to travel to the nearest record store and make you buy beyond your means. His wife and two children acknowledge his problem and continue to encourage him into rehab. He currently writes for Torched, Stereo Embers, God is in the TV, ReGen and Spill magazines.
RELATED ARTICLES
album reviewalbum reviewsbe-bop deluxe
7.0