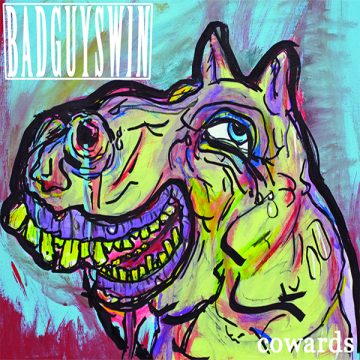 Canadian grunge band Badguyswin has released its debut album, Cowards. Hailing from Grand Forks, BC, the band lays it all on the line with a ‘90s-reminiscent, 12-track record that delivers on both nostalgia and on standing strong on its own two feet.

Opening with “Like A Sailor”, Badguyswin kicks off Cowards with a track that seems inspired by early material from the likes of Nirvana (circa Bleach), Soundgarden, and Kyuss. This is even further cemented on the excellently written, hard hitting, and lo-fi “Low Lifer”, a definite highlight on the album that will immediately draw listeners in. Singles, “Honey Bucket”, “Lying To Myself”, and “Needle Beach” are also among the stronger tracks on Cowards, and feel like obvious choices for singles as they hit a slightly more mainstream chord without sacrificing the musicality and unique songwriting.

Beyond the opening tracks and singles, Badguyswin continues to dig even deeper into the ‘90s for influence. Songs like “Fly On The Wall”, “Coal”, and “Legends Of The Wheel” deliver a crunching heaviness along with melodic vocals set over intricate instrumental passages. There is a sense of simplicity to Badguyswin, and yet, there are moments of obvious complexity that make for a truly interesting and exciting listening experience.

While at times it may feel like it drags, Cowards is nonetheless a strong release that solidifies Badguyswin as true grunge rockers. The fact alone that they choose to make their independent debut a full-length album is a bold enough move that is worth applauding in today’s musical climate. It is clear through its 12 tracks that Badguyswin are strong musicians writing distinctively ‘90s grunge and stoner rock songs which feel fresh and exciting in 2020.