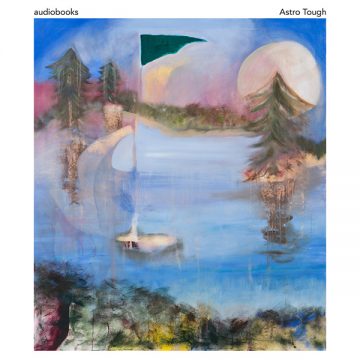 You’re at the wrong listening party if you’re anticipating London duo audiobooks will deliver songs with comprehensive narratives and linear structure. On Astro Tough, the languid reference points of their subject matter form and evaporate as unpredictably as the beats.

The cowgirl bebop computer blues of “Trouble in Business Class” epitomizes why their counterintuitive logic works. Vocalist Evangeline Ling paints just enough details about “competing with the aura of a tidy rich man/on the way to L.A.” before disembarking to a cosmic flange guitar send-off from the duo’s other half, David Wrench. Wrench is a versatile electronic music producer, hearkening the synth-pop of bands like Talk Talk, Roxy Music, and OMD in “First Move” and the Kraftwerk/New Order/Ladytron blueprint in “The Doll.” He never repeats the same trick.

Ling’s experience as a visual artist and fashion model equips her to inhabit a wide range of personae with a vocal delivery spanning Fiona Apple’s bruised warble, Mark E. Smith’s spoken-word deadpan, and the sneer of Elastica’s Justine Frischmann. Sometimes, it’s too much. Including a shrill whinny, Ling employs no less than four different vocal tones in “First Move,” one of which unfortunately exposes a limited upper register.

For many, “Blue Tits” will signal time to turn down the volume, but Ling’s queasy, hilarious appropriation of the objectification of women resists silencing. Experimental guitar and jazz bass clash with a vocal that crosses Björk’s acrobatics with performance artist Karen Finley’s outrage. The approach is obtuse, but their message is clear. When a child’s loss of her toy prompts a call to 911 in “The Doll,” audiobooks is reflecting on the disproportionate significance accorded to events we experience collectively then become pop culture.

By the time “Black Lipstick” rolls along, we’re sufficiently warmed up for the techno workout the track’s beginning all but promises. Alas, the hammer never quite lands; instead, we’re treated to more of a modular synth jam with a trippy bleep solo commandeered by Nitzer Ebb. “He Called Me Bambi” mesmerizes until you realize Ling is apologizing for something she didn’t do but was done to her: “The sky’s gone silent, my sun, my son’s sorry…Is he sorry?/Well I don’t know, I am still sorry but truly do I know?” Astro Tough’s singular yet relatable tunes unexpectedly bestow the gift of empathy.

Charles T. Stokes is a nonprofit resource development coordinator and donor researcher based in Denver, USA. He’s also a tennis player and writer looking to make a racket with his own noises. “There are places in the world where one cannot publicly listen to or perform whatever music they choose without fear of harassment or prosecution. The freedom to write about new music is power, a privilege.”
RELATED ARTICLES
album reviewalbum reviewsheavenly recordings
9.0