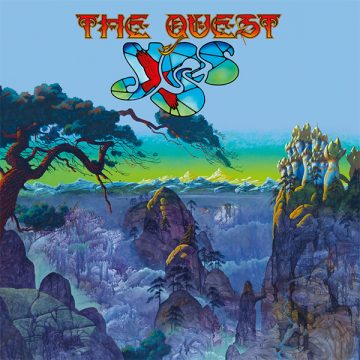 Yes
The Quest
Inside Out Music

In the early 1970s, Yes, along with such bands as Gentle Giant, Genesis and Emerson, Lake and Palmer, helped create prog rock. They wore the name proudly, as they should, and over the years have produced some of the finest albums within that genre. Now, in 2021, they have released their first album in six years (their 22nd for those keeping score) and although they have kept up with the times and created very contemporary sounds, they also revisit their classic Yes sound. The Quest is a perfect combination of then and now and proves that Yes are still a vital and important band.

Sadly, this album holds a very upsetting first for the band. It is the first Yes album to not feature original member, bassist Chris Squire, which means it is the first Yes album to not have any of the original band on it. The lineupconsists of Steve Howe (guitars, vocals), Alan White (drums, backing vocals), Geoff Downes (keyboards), Jon Davison (lead vocals, acoustic guitar) and Billy Sherwood (bass guitar, vocals). They has been together since 2015, but this is the first studio release for this incarnation. Sherwood replaced founder member Chris Squire, at Squire’s insistence, for the Yes tour to support Heaven & Earth .

From the opening fanfare of “The Ice Bridge”, you know we are in the world of Yes. Everything fans love about the band is found here in this double album. Howe’s tasteful guitar, White’s powerful drumming, and the great keyboards from Geoff Downes. Jon Davison does sound like a young Jon Anderson and his voice fits perfectly. Sherwood’s bass is fantastic and, again, he does his best to fill in for Squire but he does have his own distinct style.

Listen to “Sister Sleeping Soul”. It has every trademark of a classic Yes song, right down to the synth sounds. The layered vocals of Davison are beautiful and this should become a new classic Yes song. “Mystery Tour” is a thinly veiled tribute to The Beatles (remember White drummed for Harrison and  Lennon). Howe even joins Davison and the two form a vocal duo on a few songs (“Dare To Know”, “Leave Well Alone” and “Music To My Ears”). The two sound great together and add yet another dimension to the band.

The Quest is everything one would want and expect from Yes. Members may change, but the band has become an institution. It is a strong album full of strong melodies, rousing lyrics and even a little mysticism. It is a major accomplishment, especially when one considers it was recorded around the world, and yet, they do sound like they are playing in the same studio. The Quest can sit comfortably alongside the best Yes albums in their catalogue.

Born and raised in Whitby, Aaron discovered music through his love of The Beatles. This led to a career in radio, writing for various publications, and ultimately a radio show about The Beatles (Beatles Universe), which ran for over four years. When not immersed in music, Aaron enjoys spending time with the loves of his life -- his wife Andrea, and daughters Emily and Linda (all of whom have an intense love of music too).
RELATED ARTICLES
alan whitealbum reviewalbum reviews