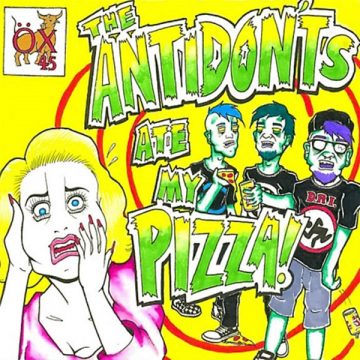 “We all go a little mad sometimes. Haven’t you?”

The Antidon’ts are a Surf Punk trio who started ripping up stages around southwest Florida. Mikey (Bass/Vox), Zac (Guitar/Vox) and Anthony (Drums/Vox) have just dropped their new EP titled Ate my Pizza. This is a classic, energetic Punk album following the release of Buckwild And Foul (2015) and the previous 320oz to Failure (2014).

Coming off the last album the band seems to be more crackerjack without losing their old school Punk stylings. Right away track one, “Self High Five,” comes bursting in with spastic drumming and fast guitars that immediately set the energy of the EP. Practically all of the songs on the album fluctuate between bang-your-head-along to mosh-around-like-a-maniac. The song names on the EP are funny as well, which is common among the greatest of Punk bands who don’t take themselves too seriously. My favourite track is “I’ll Bet He Pushes Mongo,” a little skate humor for those who shred the gnar. This particular track has a bit of a “Teenage Lobotomy” vibe to it.

A majority of the songs are teeming with distorted power chords, screeching Surf solos and grainy raw vocals. Track four,”A Little Mad Sometimes,” is a cool little concept piece taking a section from Alfred Hitchcock’s Psycho (1960) where the band plays alongside the scene. The movie was controversial for its sexuality and violence, which pairs nicely on the album. The only downside was sometimes the music drowns out the actor’s voice a little which makes it harder for the listener to follow along.

After that it goes right back into the thrashy Punk tunage. Plunging you right back into the chaos and moshing around again with a lyrical take on the exaggeratedly politically correct culture we’ve come to put up with “Banned in PC.”  “(You’re) Goin’ in The Grinder” is another great song with some catchy basslines matched by Surfy scales.

Between the guit-box wails and chugs, it’s not an album you’d want to put on before bed. Over all it’s a great little EP to play loud and bang along with. They definitely live up to their self-proclaimed Surf Punk vibe. The songs are short and sweet and leave you wanting more without any down points on the album. Can’t wait to hear more from the band as they progress, and I bet they put on one hell of a live show.

Here's what we think...
Spill Rating
Fan Rating
Rate Here
New Criteria
10
10
7.0
Total Spill Rating
10
Total Fan Rating
You have rated this
Album Reviews
(you're) goin' in the grinder320oz to failureate my pizzabuckwild and fouloptimistic losersound lounge recordingsthe antidon'ts
(you're) goin' in the grinder, 320oz to failure, ate my pizza, buckwild and foul, optimistic loser, sound lounge recordings, the antidon'ts
About the Author
Dylan Weller