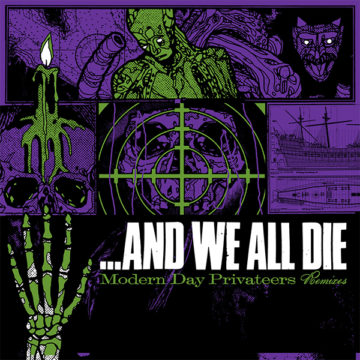 …And We All Die
Modern Day Privateers (Remixes) + Outtakes
Independent

This is hard, danceable, industrial music with a tinge of 1980s melody thrown in to complete the picture. What is interesting is how different each remix sounds, yet maintaining the energy and drive of the original version. For this particular project, Estes asked some friends to remix the song, and some of his friends are fairly well known. The EP kicks off with Daniel Ash (Bauhaus, Tones on Tails, Love And Rockets, Poptone) taking the song into a loud chaotic field. The “Daniel Ash Remix II” is loud and a brilliant way to begin the proceedings. This is an area in which Ash may want to do more work — industrial dance remixes.

Synthpop duo, The Rain Within, provide a primarily instrumental remix that is very heavy towards the 1980s while Ben Weinman (Dillinger Escape Plan) takes orchestrated noise to a whole new level, and it works beautifully with this song.

Other notable remixes come from Ghost, Mindless Faith, Rodney Anonymous (The Dead Milkmen)  and Assemblage 23. They all bring their own strengths and differences to the song, and as such are able to create something new.

It is to Estes’s credit that he has created a song that can be mixed and turned around as this one has. I don’t know if the EP was meant to be listened to in one sitting, as by the end the mixes all run together. I found listening to a remix and coming back to the EP served the song and the mix better. Modern Day Privateers is proof that artists are still experimenting with sound while still creating a listenable and danceable song. Fans of the band and of industrial music will enjoy this set. I do, however, look forward to new music from Estes and …And We All Die.

Born and raised in Whitby, Aaron discovered music through his love of The Beatles. This led to a career in radio, writing for various publications, and ultimately a radio show about The Beatles (Beatles Universe), which ran for over four years. When not immersed in music, Aaron enjoys spending time with the loves of his life -- his wife Andrea, and daughters Emily and Linda (all of whom have an intense love of music too).
RELATED ARTICLES
album reviewsassemblage 23daniel ash
9.0