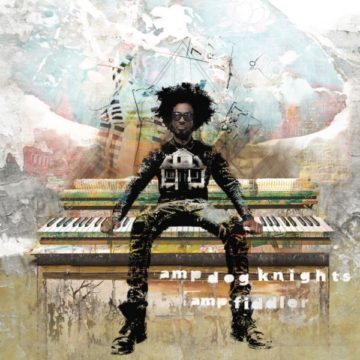 Amp Dog Knights is the fourth studio album by Amp Fiddler, and it’s truly one of a kind. Recorded and produced in Detroit, Amp Dog Knights is a kind of “back to the roots” project. Joseph ‘Amp’ Fiddler worked with great musicians to create this record. The song “Put Me in Your Pocket” features guitarist Chris Bruce; ‘I Get Moody Sometimes’ is a collaboration with musician Moodyman. “Return Of The Ghetto Fly” represents the soul of Detroit with the help of J Dilla, rapper T3 (member of Slum Village) and singer Neco Redd.

And there is a reason Amp’s music sounds so unique and groovy. Previously, he has written and recorded music with outstanding artists like Prince and Seal.

Amp Dog Knights features eleven extraordinary songs and three remixes. Every single track is unlike the other, and tells a different and meaningful story. It is as though every song could be assigned a different genre. Funk is certainly the flagship of this record, but definitely not the only musical influence. Pop, soft rock guitars, soul and R’n’B sounds all contribute to making this record so special.

This is his second album after his break from music in 2006, following a personal tragedy in his family. We are glad that Amp is back now. It goes without saying that he really wants people to hear his message, and listen to his music as much as possible: ‘I want to hear it in shops, when I’m at the airport, I want to hear it everywhere’, says Amp.

Lean back, close your eyes and enjoy the sounds of this perfectly smooth record.

Sarah is a journalism student, music blog chief editor and music lover. Growing up with the music of Lenny Kravitz, Michael Jackson, The Red Hot Chili Peppers, Queen and Prince, she got into the world of rock music. Discovering new music and writing about artists and records has always been one of her biggest passions. In 2013 she founded the German music blog ‘Old Vinyl’ and is chief editor ever since. Her biggest dream is being a music journalist for the rest of her life.
RELATED ARTICLES
album reviews
8.0