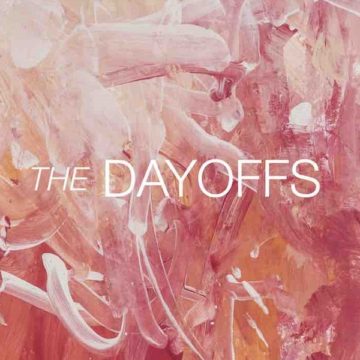 The story of how the Dayoffs came to be actually began with other artists’ work. Producers Vladimir Komarov and Atsuo Matsumoto were in a recording studio in Manhattan when they veered off course and started recording some instrumental improvisations on their own. Fast forward and the pair founded The Dayoffs, a name inspired by their struggle to find studio time for their own music.

Infused with the spirit of New York City, their self-titled debut LP The Dayoffs isn’t a straight-up rock album — the band’s unique sound features an impressive diversity of sound and genre influence, drawing from many different styles of rock, pop, and electronic music. At times loud, calm, fast, slow, melancholic, and happy, the album takes the listener on a journey through Vladimir and Atsuo’s emotions, New York City, and unknown places. The combination of electronic sounds, catchy guitar riffs, driving beats, and dynamic vocals are well-chosen and the reason why this album is an absolute must-have for any music lover.

The Dayoffs don’t just make music. They combine their musical talents with personal ideas, emotions, and inspirations. Their song “State Of Madness” is one of the best examples. “Some might say that New York City is a state of mind. I would say it’s a state of madness. But there’s no better place for leaving it all behind.”

“I Can’t Believe I’m Dead” is another highlight. Fast guitar riffs and a rough, multifarious voice bring the track a really special sound, that feels reminiscent of David Bowie.

One thing is clear: Vladimir and Atsuo poured all their heart and soul into this great piece of music. Authentic, modern, and honest, The Dayoffs are about to become a rising star in the rock/pop world.

Sarah is a journalism student, music blog chief editor and music lover. Growing up with the music of Lenny Kravitz, Michael Jackson, The Red Hot Chili Peppers, Queen and Prince, she got into the world of rock music. Discovering new music and writing about artists and records has always been one of her biggest passions. In 2013 she founded the German music blog ‘Old Vinyl’ and is chief editor ever since. Her biggest dream is being a music journalist for the rest of her life.
RELATED ARTICLES
album reviews
9.0