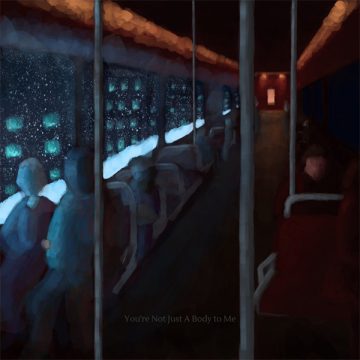 Alex Southey is a newcomer to the indie folk scene in Toronto. Actually, according to his bio, he has only been playing for two years. Given the quality of music and lyrics on this album, I find that hard to believe. Although Southey lists his influences on his website, it should be known that he has created his own distinct sound and music. Maybe the influences creep in, but for all intents and purposes, he has begun carving out his own sound.

You’re Not Just A Body To Me is his sophomore album, following his 2019 release Christmastown. The album, according to Southey, has themes about “Canada, romance, depression, and daily life”. Perhaps not the most original subject matter for folk artists, but in Southey’s hands these topics do become very original, at least in the way in which he expresses himself. The opening track, “Running Into The Water, Nelson B.C.”, is an excellent example. It begins with a lovely orchestrated piano piece for a minute and 25 seconds. This is  followed by five seconds of silence, then “Are you tired of off days?”, Southey asks. “Waking up and feeling dread?”. This, in a very short time, sets the overall vibe of the album.

Although this is not a ‘concept’ album in the traditional sense of the word, it does bring the themes together and the album has bookends. It opens with the “Running Into The Water, Nelson B.C.”, which tries to put depression into words and music, however the album ends with some hope. “The Fall Positive (and Goodbye)” is a beautiful song. In it, Southey sings “I’m waking up to medication,/And your Fall positivity.”  Perhaps not the happy ending you want but it is hopeful.

It is worth noting  that all the money raised from this album will go to CAMH, Toronto’s Centre for Addiction and Mental Health. While that should be applauded, the fact that an album is raising funds for a worthwhile charity does necessarily mean that it is a good album. In this case, however, the album is stunning. It is well-produced, and he uses his lyrics in a unique way to express himself.  You’re Not Just A Body To Me is an album that demands and deserves your attention.

Born and raised in Whitby, Aaron discovered music through his love of The Beatles. This led to a career in radio, writing for various publications, and ultimately a radio show about The Beatles (Beatles Universe), which ran for over four years. When not immersed in music, Aaron enjoys spending time with the loves of his life -- his wife Andrea, and daughters Emily and Linda (all of whom have an intense love of music too).
RELATED ARTICLES
album reviewalbum reviewsalex southey
8.0