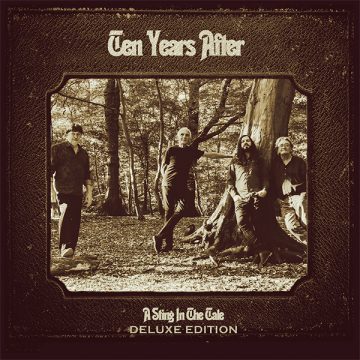 It would be easy to dismiss a deluxe reissue of an album by any band as being a mere marketing ploy to grab some cash. Covid times have not been kind, and many touring acts have taken this tack, if only to generate some much-needed income in the absence of being able to perform live. But that does not really seem to be the case with Ten Years After and the deluxe repackaging of their 2017 album, A Sting In The Tale.

Far from being a nostalgia trip, this album was recorded 50 years after the group’s original run of success, under the leadership of singer/guitarist/creative spirit Alvin Lee. Remarkably, many of the qualities of the early incarnation of this band are still present, both in spirit and in sound. This is in no small part due to the guidance of original members Ric Lee (drums) and Chick Churchill (keys). Together with legendary blues stalwart, bassist Colin Hodgkinson, and multi-award-winning singer/guitarist Marcus Bonfanti, Ten Years After continue to show their relevance, pushing the British blues-rock boom well into the twenty-first century.

There is no shortage of brilliance on this album. With songs as diverse as “Retired Hurt” with its riff-heavy guitar and organ interplay, the funky groove and fun of “Miss Constable”, or the rocking blues heartache of “Suranne Suranne”, Ten Years After tick off a number of stylistic boxes. Throw in four additional live recordings of three of this album’s tracks, in addition to their classic “I’d Love To Change The World”, and you’ve got one sweet little package. There are many more bright spots on this album that I could mention, but you owe it to yourself to hear the music.

Bryan Williston has been involved in music since he was a young child. A veteran singer, songwriter, and music educator, Bryan has enjoyed playing a multitude of musical genres in a variety of outfits, over the years. Bryan lives in Whitby, Ontario.
RELATED ARTICLES
album reviewalbum reviewsdeko entertainment
9.0