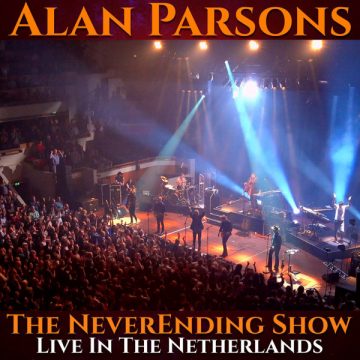 Alan Parsons started his musical life as a studio-only musician, as well as an engineer and producer. He famously worked on The Beatles’s Abbey Road, Pink Floyd’s Dark Side Of The Moon, as well as several Paul McCartney and Wings albums. He also produced Al Stewart and Steve Harley among others. When he formed The Alan Parsons Project with Eric Woolfson, it was intended as a studio-only band, and remained as such for the majority of that band’s life. As a solo artist, however, Parsons has toured consistently, and this means he has also released several albums. The NeverEnding Show: Live In The Netherlands is his sixth live album and they are never disappointing. This one was recorded on May 5, 2019 when The Alan Parsons Live Project was caught live at the Tivoli music venue and entertainment complex in Utrecht, The Netherlands.

Parsons surrounds himself with very talented musicians and singers. For example, P.J. Olsson, who has been working with Parsons since 1998, sounds great in tackling the Alan Parsons Project classics, as does long-standing member Todd Cooper who not only sings but plays those  saxophone parts on the albums. Along with the rest of the band special mention to Danny Thompson, whose drumming is solid throughout. These artists reproduced the classic Alan Parsons Project sound, and of course Parsons himself adds a great deal.

The album opens with “One Note Symphony” from his most recent album, The Secret, and then swiftly moves into the classics, “Damned If I Do”, “Don’t Answer Me” (which sounds quite exciting live), “Time”, and “I Wouldn’t Want To Be Like You”. The big hits are here, including “Eye In The Sky” and “Games People Play”. but there are some surprises as well. Parsons goes back to the Alan Parsons Project debut, Tales Of Mystery And Imagination, for the “(The System Of) Dr. Tarr And Professor Fether”. There is also a new studio track, “The Never Ending Show” which shows that The Secret was not a fluke and there is still great music to come from Parsons and company.

As live albums go, The NeverEnding Show: Live In The Netherlands is extremely good. Fans will have heard live versions of these songs before, but there are some differences from the other collections. While Parsons is smart enough to not mix with perfection and perform the songs as they first appeared, there is still a definite different feel to the slightly new arrangements and there is new life in the songs. Fans will enjoy the album, and for others, it is a gentle reminder as to how talented Parsons is as a musician and writer.