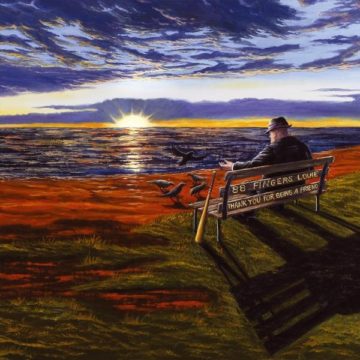 There seems to have been a resurgence of 90’s punk bands lately. New albums from Green Day, Rancid and Blink-182 have all found their way onto the airwaves (for the purpose of this review, we’re going to count Blink as punk. You can call for my head in the comments section). One band I never expected to hear from 88 Fingers Louie again. It’s been 19 years since 88FL released new music, so imagine my surprise when the opportunity came up to review the new album, Thank You For Being A Friend, crossed my desk.

Even more surprising – this album rocks! Unlike most comeback efforts from re-united bands, this album seems to showcase a more mature and diverse sound, while still firmly grasping their punk rock roots. Make no mistake, this is a punk album from beginning to end. From the opening and hard-hitting track, Meds to the searing guitar riff of Catastrophe Awaits, this album demonstrates the growth of four guys who have spent the last two decades perfecting their craft in different facets of the music industry. I don’t know if this was a one off recording, or if their are more albums in the bag, but if this is it – I’m going to make a bold statement. They’ve saved their best for last.  Even if I was secretly hoping for a cover of The Golden Girls theme song, Thank You For Being A Friend.

Drew is a Hamilton, Ontario based photographer who likes to think he can string two words together. His passion for music and photography is matched only by his love for his wife, dog and the Leafs.
RELATED ARTICLES
album reviews
9.0