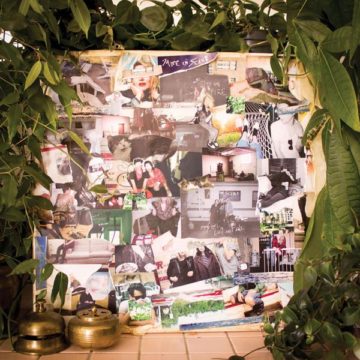 Things have changed for Mise En Scene since their 2012 debut, but only in the best ways. The Winnipeg-based duo, consisting of lead singer and guitarist, Stefanie Blondal Johnson, and drummer, Jodi Dunlop, have become a trio, adding Corey Hykawy as their permanent bassist. Growth has not only been in numbers, however, as can be heard on their sophomore album, Still Life on Fire; three years of emotional and creative movement is beautifully apparent. BlondalJohnson began penning the album back in 2014 during her musicians’ residency at the Banff Arts Centre in Alberta. After a brief stint of writer’s block, Blondal Johnson, with the help of Dunlop, managed to articulate feelings of vulnerability, honesty, and acceptance into twelve tracks. Upon finishing recording in Winnipeg, Still Life on Fire moved to Montreal to be produced by the brilliant Mike Nash, who has worked with the likes of Blue Rodeo and The Dears.

Beginning with a soft and inviting intro, entitled ‘Intro (Nothing)’, we are gently eased into the record. Gears are quickly switched with the second track and first single off the album, ‘Closer’, where Blondal Johnson shows us powerful vocals and a forceful scream. This contrasting dynamic continues throughout, as catchy melodies are off-set by deeper, slower songs. “I’m Ok” is probably the most moving of the twelve tracks, where an emotional Blondal Johnson begs you to believe that she is, in fact, ok. Once again, we are abruptly brought to catchy and high-energy rhythms, complete with delicate bells heard over guitar, a la “Waster”. The album progresses on in an easy listening fashion, ending on a positive instrumental in “Outro (Everything)”.

The addition of Hykawy is apparent throughout the entire record, especially in comparison to their first album, Desire’s Despair. Still Life on Fire sounds fuller and more complete, defending the ‘punk’ aspect of their punk-pop label. While not a complete reinvention of their sound but a definite improvement, Still Life on Fire is successful portrayal of growth and maturity.

The Spill Magazine is a Toronto-based online publication dedicated to covering the independent music scene with a strong focus on our thriving hometown talent. Our writers bring you up-to-date news, in-depth features on musicians and reviews for the latest CD releases. We also travel to the front lines for all local festivals including Canadian Music Week and North by Northeast. Don’t forget to check out our Facebook and Twitter pages for all daily Spill updates.
RELATED ARTICLES
album reviewscloseri'm ok
7.0