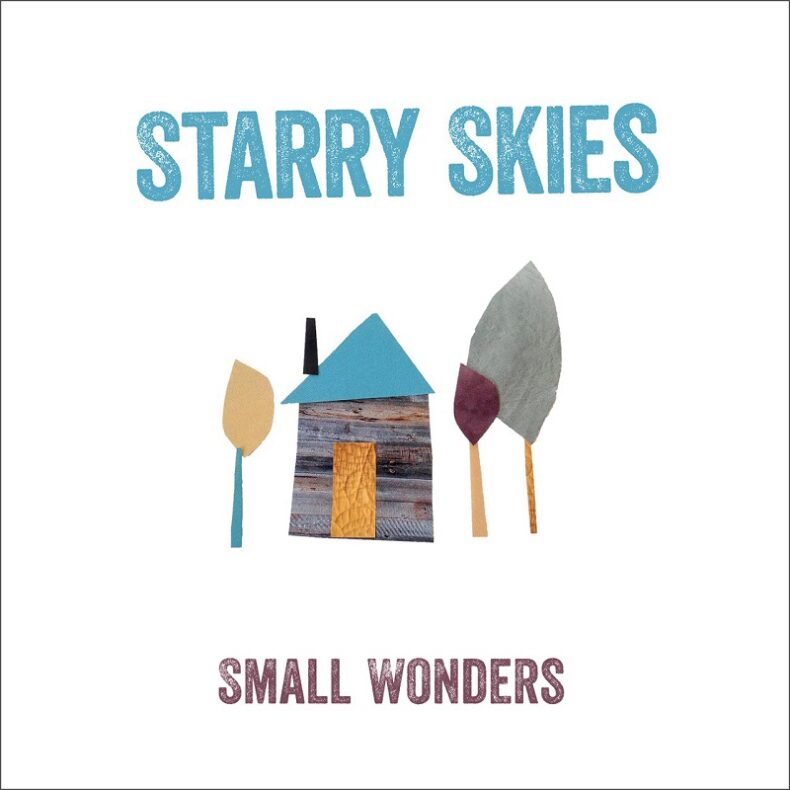 There are numerous musical genres that Scotland has become known for over the decades, reaching back to the 70s and 80s, with more pronounced recognition coming later once less ‘mainstream’ genres gained popularity – postpunk, indie rock and folk-rock among those that first come to mind when indexing better known artists.

But one thing we often forgot is how Caledonia came to be such a musical wonderland in the first place and those roots run deep, tracing back to traditional music, of course. Combine the lilting elements from yesteryear with indiepop and the wisdom and raw, endearing delivery of poetic psalms by the likes of Nick Drake, Bob Dylan or Lynyrd Skynard and you will end up with the artist we present to you today.

Known by the name Starry Skies, the Glasgow-based collective unveils a series of 10 ripe and beautiful tracks on their fourth studio album Small Wonders released via Fox Star Records. Here on this crowdfunded record, they combine elements of folk music, indie pop and classic rock. Teeming with positivity, Starry Skies’ music is bountiful and grounding while, at the same time, giving cause for deeper thought.

Shaped by personal encounters with music icons Nina Simone, Iggy Pop and Chuck Berry, Warren McIntyre (a.k.a. Warren Starry Sky) founded the band in 2014 to encourage the proliferation of positive, hopeful music. Today, Starry Skies is made up of McIntyre, Jenny Lunan, Heather Phillips, Sophie Pragnell, Johnny Rooney and Adam Scott, who come from various parts of Scotland, England and Australia. Over the years, they have supported Snow Patrol, Belle and Sebastian, The Vaselines and Teenage Fanclub.

While the tracks that stand out the most upon first listen include “Smile Through The Dark”, “Kind Hearted People”, “Spitfire Susie”, “Highwater Eagle”, “I Was Lost” and “I Don’t Wanna Be That Kinda Guy”, upon second listen it’s clear that the whole album is stellar and it’s no wonder that it has already received rave reviews from UK press and radio.

“This record is intended to celebrate the small wonders that are all around us if we open our eyes to see them. The songs were written during 2021, when we were all really grateful for small things like being able to go for a walk with a friend. But, as a collection, they ended up a bit of a mish-mash of lyrical-led protest songs, some folk-pop with cello, viola and violin, a beautiful sparse piano ballad and even a couple of punky indie dance floor fillers,” says Warren McIntyre.

Ahead of the album, the band presents sonic goodness, hope, beauty and kindness in the songs “Kindhearted People” and “Spitfire Susie”, which tells the story of a local hero and force of nature Miss Susie Ross, who fixed spitfires during the war and taught thousands of children in the years afterward.  She and Warren became friends and he wrote the song in her honour.

“The song ‘Highwater Eagle’ is written from the standpoint of a young First Nation woman. After recording it, we worried about anyone thinking it was cultural appropriation, so I sent it to the Native American Indian Association. Their president A’lice Myers Hall wrote back to say she thought the words are beautiful and that I had been sent the words to share with people. She also suggested working with some native poets and musicians to share stories,” says McIntyre.

As of August 12, Small Wonders will be available everywhere digitally, including Apple Music, Spotify and Bandcamp, as well as on CD and sky-blue vinyl. Distributed through Proper Distribution in the UK and Redeye in the USA, the record can be found in record shops or purchased directly from Last Night From Glasgow HERE

Also enjoy the title track of their previous album “Do It With Love” and another recent live performance from Scotland’s Ride Brewery: