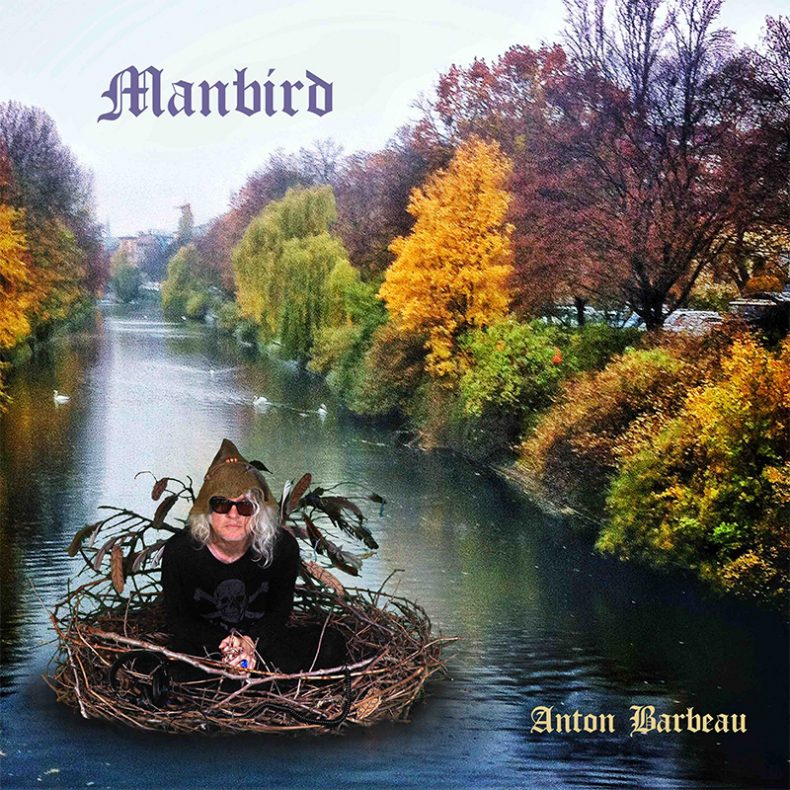 If you’ve been around a while and your finger is constantly on the pulse of the music scene (in this case, the US, British and German music scenes), you may already know the protagonist of this feature. Nonetheless, we have the honour of introducing you to the latest LP (a double album at that) from Sacramento-raised Berlin-based chic power pop ambassador Anton Barbeau.

Psychedelic and clever, minimalistic at times and weaver of sonic labyrinths at others, singer-songwriter Anton Barbeau is back to thrill the world once again with his new ‘Manbird’ double LP ,

Lyrics and melody combine sweetly. A superb showman, widely recognized for his originality and irreverent pop genius – from the BBC and leading publications to fans worldwide, it’s no wonder his work is often likened to Robyn Hitchcock, John Lennon, XTC, Julian Cope and David Bowie.

This is a collection of new songs, written in Berlin and on a farm in Auburn, CA. The title takes inspiration from the film ‘Lady Bird’, a coming-of-age-in-Catholic-school story set in Sacramento, where many of the film’s locations are well familiar to Barbeau.

Hitting the 30+ album mark, it would seem inevitable that this Berlin-based Sacramento-raised artist would release a bird-and-suitcase-themed autobiographical double album focused on his hometown. While reviewers always seem to refer to the holy triumvirate of XTC, Julian Cope and Robyn Hitchcock, ‘Manbird’ doesn’t reveal any obvious influence.

“I was in a world of my own making with Manbird. Every song on this album has a purposeful vibe, and my writing standards were high. I mean, who doesn’t want to live inside a double album odeled after Tusk, The White Album and 666?” asks Anton Barbeau.

Ahead of this new album, he released the ‘Manbird’ single with b-side ‘The Art of Beaking’, along with a video created by Julia VBH.

Musically, ‘Manbird’ is a Jungian travelogue of memories, dreams and reflections, with Barbeau’s unique blend of psychedelic salt-and-sugar pop augmented by unexpected elements that play a part in his story. His first ever song, ‘Cowboy John’, written when he was 8, follows punk-rock boxing anthem ‘Featherweight’, which morphs into the Hare Krishna chant. This anti-hero’s journey wends its way back home by way of krautrock drones, mockingbird solos, mushroomic nursery rhymes, British wyrd-folk and even a touch of 12-tone serialism.

In Oxford, Barbeau assembled a chorus of singers for the album’s final session. “I’d hoped to gather lots of singers for the record, to have a sort of Greek chorus answering me in various songs. I wasn’t able to put it together as hoped, and mostly, I’m acting as my own Greek chorus,” says Anton Barbeau, who also worked up a special “Oxford Variation” of the title track, featuring his Ox cronies Su Jordan, Sharron Kraus and Stornoway’s Jon Ouin.

“Maybe it’s the fate of an eternally ‘culty’ artist like myself that reviewers try, helpfully I think, to compare my work to that of better known acts to give the reader a point of reference. While my previous release, ‘Kenny vs Thrust’ featured a number of older songs with influence firmly on sleeve, ‘Manbird’ is the sound of me rubbing off on me, acting as my own influence,” explains Barbeau.

“There are a few moments where I play with the image of other acts I adore – ‘Fear of Flying’ is meant to have a taste of the drum sound from Fleetwood Mac’s ‘Brown Eyes’ and ‘Memory Tone’ was me trying to write an ABBA song! These are both bands I grew up disliking immensely. During the course of making Manbird, though, I fell firmly in love with both. I slip into ‘Bowie voice’ for a section of ‘Across The Drama Pond’ and the bass is meant to have a bit of Devo to it, but all in the service of my new wave roots.”

As of September 18, the ‘Manbird’ LP will be released via Gare du Nord (UK) and Beehive Sound (USA). It will be available across online platforms, including Apple Music and Spotify, as well as on CD. It can be ordered directly from the artist via Bandcamp at https://antonbarbeau.bandcamp.com/album/manbird

Also check out his fun-loving video for ‘Manbird’: