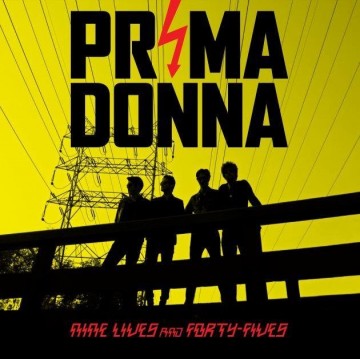 Los Angeles foursome Prima Donna is back with an impressive 11-song studio album. Nine Lives and Forty-Fives features eight original songs, and three covers: “I’m On Fire” (Dwight Twilley), “Rock and Roll is Dead” (The Rubinoos), and “Rip Her To Shreds” (Blondie).

The band shows their range throughout this, their 4th album, starting with solid pop punk in “Pretty Little Head,” then taking you on a head-bopping journey where they show you there’s no pigeon-holing them as simple “glitter glam-rockers.” Each song is solid and well-produced, which is to say, it doesn’t come across as overly produced. It’s lively and fun, if not a bit genre-bending, harkening back to what I’ve always pictured the 70’s Los Angeles music scene must have been like to be a part of. Their love of the city is clear; it’s mentioned in almost every original track. While I can imagine those without the L.A. wanderlust might find that a bit cloying, I enjoy it, much as I do the raw parts of the city this album reminds me of.