SPILL LIVE REVIEW: THE HARPOONIST AND THE AXE MURDERER @ THE HORSESHOE TAVERN, TORONTO 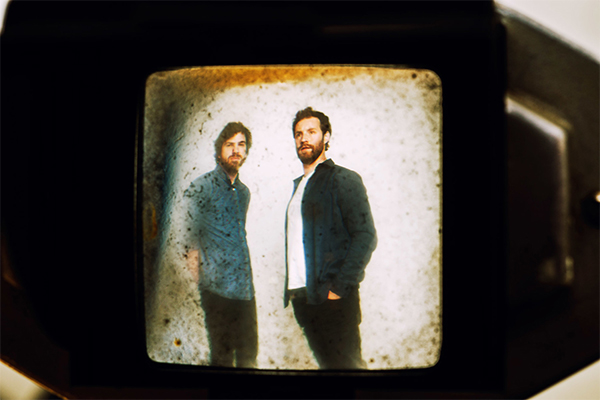 The Harpoonist And The Axe Murderer
@ The Horseshoe Tavern, Toronto
September 10th, 2015

‘Took my harpoon out of my dirty red bandanna /And was blowin’ sad while Bobby sang the blues . . .’

– “Me And Bobby McGee,” Kris Kristofferson and Fred Foster

As you can see, there is nothing murderous or savage about Harpoonist And The Axe Murderer, except maybe the way they play the blues. Their recent performance at Toronto’s legendary Horseshoe Tavern is certainly a testimony to that. Shawn “The Harpoonist” Hall and Matthew “The Axe Murderer” Rogers took the place by storm – that is not an exaggeration!

After opening sets by Stan Simon & The Hotel Bible, and Ben Rogers (featuring brother Matthew Rogers on guitars), the curious stage setup began. A set of drums perched at the front of the stage, with guitars set up beside them. To the left of that was another percussion foot apparatus, a number of microphones and a CASE of harmonicas. At the far left of the stage were two standing microphones.

The pair came packed with a bag full of songs from their three album releases. In 2008, they released their self-titled debut LP, followed by 2012’s Checkered Past, and most recently A Real Fine Mess, in June 2014. Quietly walking onstage, they kicked off their set with “A Real Fine Noise,” from their latest album. Then they sweat their way through the setlist, and the heat was sweltering. 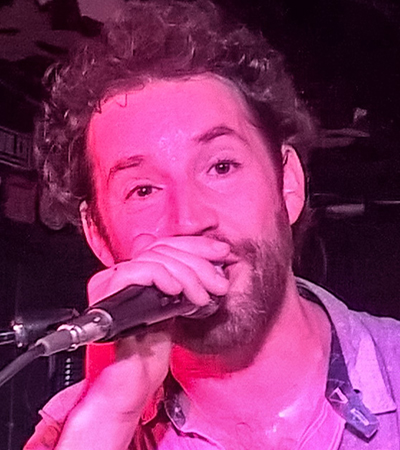 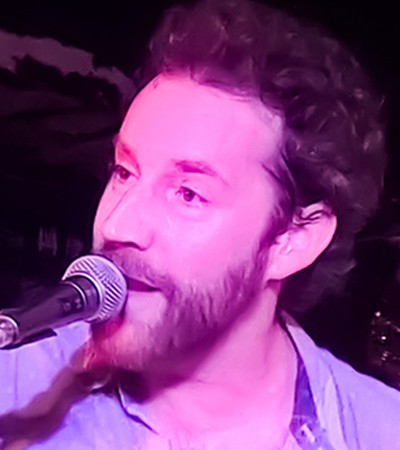 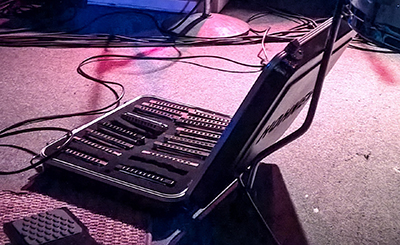 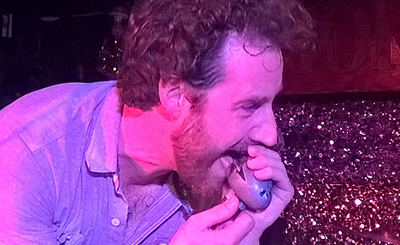 Though the duo is now based in Vancouver, Hall is a local and joked that the crowd must be filled with friends and family. The pair has been making quite a name for itself over the past few years. Their albums have been nominated for several awards, including a Juno and a Maple Blues Award. The band won a Sirius XM award for Blues Artist of the Year in 2013. They have also been busily pounding the festival pavement this year.

This is one hardworking stage act. Yet, being an audience member is not a passive activity either. Jokingly bantering back and forth with the audience about the ingestion of mushrooms and the expenditure of body sweat, Hall invited them to either sing along, or to call and response, and the music alone prevents you from standing still. As one fan said, their blues “gets you in the crotch.” As if their own set wasn’t enough, to the audience’s utter delight, the entire Ben Rogers band joined them onstage for their encore, performing Marc Bolan’s T. Rex classic, “20th Century Boy.”

Harpoonist And The Axe Murderer was joined on stage by famed West Coast blues singer Dawn Pemberton, whose voice alone could make Alabama Shakes shake. Add that to Hall’s, whose voice at times appears to be summoning the devil himself, along with the physical exhaustion of Rogers’ multi-limbed instrumentation, and you’ve got a combination that can’t lose. This is one highly polished stage act – one that creates “A Real Fine Noise.” This band is a definite must see.

Trish Melanson lives in the Toronto area with her three boys, Nicholas, Justin, and Eric, her dog Jakkson, and her cats Max and Jagger. She is the former host and producer of Canadian Kickass, a weekly two hour radio show on New Jersey's Chestnut Radio, showcasing Canadian Music. She is also a former Web Content Manager of Indie Soundscapes, an online showcase for Independent Music Artists Worldwide, and was a regular music contributor to The Stroumboulopouli. She is a fervent supporter of the Toronto live music scene. In a past life she was a teacher and Vice Principal in Durham Region. She has many more new and exciting projects waiting in the wings. ;)
RELATED ARTICLES
the harpoonist and the axe murdererthe horseshoe taverntoronto

by SPILL NEWS on May 8, 2018
THE HARPOONIST & THE AXE MURDERER ANNOUNCE SUMMER TOUR DATES “GET READY” VIDEO NOMINATED FOR LEO AWARD FOR BEST MUSIC VIDEO This Summer, The Harpoonist & The Axe Murderer, aka Shawn Hall and Matt Rogers, are hitting the road [...]

by SPILL NEWS on December 7, 2017
THE HARPOONIST & THE AXE MURDERER ANNOUNCE 2018 TOUR DATES IN TORONTO, VANCOUVER, EDMONTON, CALGARY AND MORE JUNO AWARD NOMINATED BC DUO’S APOCALIPSTICK UP FOR THREE MAPLE BLUES AWARDS On the heels of three Maple Blues Award nominations, the [...]