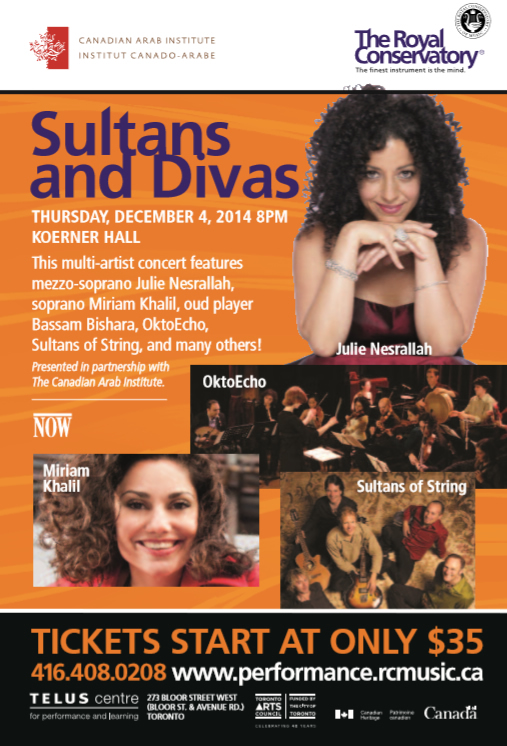 Soaring performances, groovy sounds, and new explorations into music marked a warm musical trip to the Middle Eastern Kasbah on Dec. 4. There we were serenaded by music and performances of Arab Canadians and bands influenced by Middle Eastern music.

The night opened with Bassam Bishara playing an oud, a Middle Eastern stringed instrument that plays exotic modal scales and tones reminiscent of its homeland. Following the opening oud solo, rising Arab soprano Miriam Khalil joined Bishara to perform “Aatini el Naya Wa Ghanni,” a Middle Eastern folk song. Khalil’s voice and performance in her native Arabic tongue was one to experience, plus pairing it with the oud backing gave the music a truly classic authenticity to the cultural backdrop.

In addition to the ethnically authentic performances that opened up the evening, sections of the night were devoted to classic operatic arias performed with great execution by Khalil and Julie Nesrallah. In the first set, soprano Nesrallah takes on Bizet’s “Habanera” with such authority and sass that it truly displays her command of the classic material. The same goes for Khalil, who takes on Puccini’s “Quando M’en Vo,” which was treated as a soaring love ballad filled with positivity and emotion. The two sopranos would join forces in the second set to sing renditions of Leo Delibes’ “Flower Duet” and Franz Schubert’s “Ave Maria,” which literally took us to the heavens and back with their wondrous voices singing in complete unison. 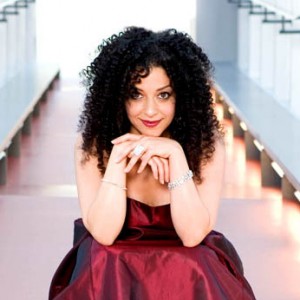 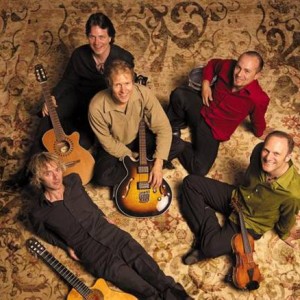 In the first act, a group from Montreal known as Oktoecho closed the set with a program of original music written by conductor Katia Makdissi-Warren. Their set incorporated Middle Eastern music, Western classical, and even jazz influences into a unique and completely exotic sound. They employed strings, piano, oud, drums, percussion, and even belly dancing to create an experience that virtually took the audience into a Middle Eastern marketplace filled with action, intrigue, and adventure. The music even sounded like a movie soundtrack with all the instruments coming together to produce a full orchestral sound.

The other main group, the Juno-nominated Sultans of String led by Lebanese Canadian violinist Chris McKhool, brought elements of flamenco, world fusion, folk, and jazz into an exciting program that electrified the second act. Their opening number “Alhambra” blended their trademark sounds of flamenco and Middle Eastern flair with touches of funk for good measure. By the second number, “El-Kahira,” the crowd got up on their feet, moving to the music along with a guest belly dancer that provided exotic dance moves to keep the audience enthralled and enchanted. Another highlight was their ballad treatment “Josie” and closing number “Auyuittuq Sunrise,” which paid homage to the great white North and the native peoples who inhabit it. The performances were fresh and funky, and the music represented a unity of cultures and traditions that brings a universal connection for those sharing in the process.

The closing number brought all of the artists together to perform a Middle-Eastern piece called “Bint el Shalabiya,” which was a rousing performance that brought a celebratory tone to the evening. The last number would make you want to belly dance and party in the Middle Eastern market square with all that music in the air. Overall, it was a great night of paying tribute to and celebrating the great cultural landscape of the Middle East through dance, singing, and music pulled off by top-notch musicians at the peak of their powers.

Conrad Gayle is a jazz pianist, composer, and writer. He released three albums, "Genesis EP", "Foundations" and "The Live Sessions 09/10", his first book "The Real Conrad Black", has an active YouTube channel and maintains his own blog site called "The Conrad Gayle Review". He is a graduate from York University with a degree in sociology. He is also active in the city of Toronto as a solo artist and leader of his own trio, as well as being the regular pianist in his home church. He has written for the Spill Magazine for over four years and is planning on continuing the course to become a very successful writer.
RELATED ARTICLES
koerner hallsultans of stringtoronto