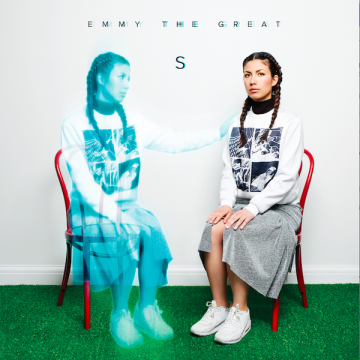 S, the new EP from British singer-songwriter Emmy The Great, packs a punch. The album features four songs with names starting with the letter s and, more importantly, offers up powerful lyrics and catchy pop.

According to Bella Union, S was written in Salt Lake City, Tokyo, Hong Kong, LA, New York and London, and it does have a worldly feel. “As I wrote the songs I began to reflect more and more (about) the world that I saw around me: incredibly bright, technologically breathtaking,” Emmy (whose given name is Emma-Lee Moss) explains on the label’s website. “I am curious about being a person in this world, and I tried to write that into the music.”

The EP starts off so strong with “Swimming Pool,” which has a haunting quality. Maybe it’s Emmy’s beautiful voice; maybe it’s the rippling keys. It could be the lyrics, or maybe it’s the dark addition of Tom Fleming’s deep voice – either way, this is a song that sticks with me, and I expect we’ll hear a lot of it in the coming year.

Emmy follows that gem up with “Social Halo,” a catchy tune with moody guitar that opens with the great line: “Oh no, everything’s moving so close, I’m starting to lose my social halo.”

Synthesizers help build up the energy in the third track, “Solar Panels,” which is really catchy and has a global feel.

The final song on the album, “Somerset (I Can’t Get Over),” is another highlight. It’s beautiful and sad and includes references to F. Scott Fitzgerald and Tennessee Williams. “Come outside, let’s talk about something that’s real, like, please don’t get over me,” Emmy sings in her crystal-clear voice.

S is a catchy, colourful EP that showcases Emmy’s strong pop writing and beautiful voice, and if it is a preview for a new full-length album, it makes me really excited to hear more.