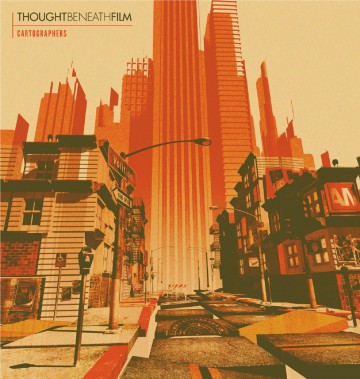 The thoughts that lie beneath the film, the thin veil of disguise, are not always what they seem. So it is with Thought Beneath Film’s Cartographers. It would be easy to dismiss this album as nothing more than a bubbly, power-pop cocktail. However, beneath all those bouncy beats are powerful, sophisticated lyrics; beneath the film there is so much more.

Cartographers is the first full-length album for the Stoney Creek, Ontario based trio. Three years in the making, it was mixed and mastered by legendary Grammy Award winners Tom Lord-Alge and Bob Ludwig respectively. The result is a clean, razor sharp sound, catchy memorable tunes and refined lyrics. The upbeat melodies contrast with the lyrics woven with teenage angst, searching for purpose and finding one’s path. Like the title says, Cartographers, we are finding out own map.

The tone is set early on with razor-sharp guitar riffs and exploding drum beats in the opening track, “Cartography”. It immediately sets the tone of urgency that underlies the theme. “The Art Of Giving Up”, Sixty Six” and “If I Could Fix You (You Know That I Would)” have great melodies and slick vocal harmonies that make you want to sing along. The last track, “This Time”, starts off as a melodic ballad and ends in an orchestra-driven rock song, which somehow leaves you with a sense of reckoning and hope.

Cartographers is the kind of album you want to play in your car at maximum volume with your feet out the open windows on a warm sunny day. It is bound to be the soundtrack of summer 2014 with its catchy tunes, punk pop beats and memorable lyrics. Overall, an impressive debut album.

Trish Melanson lives in the Toronto area with her three boys, Nicholas, Justin, and Eric, her dog Jakkson, and her cats Max and Jagger. She is the former host and producer of Canadian Kickass, a weekly two hour radio show on New Jersey's Chestnut Radio, showcasing Canadian Music. She is also a former Web Content Manager of Indie Soundscapes, an online showcase for Independent Music Artists Worldwide, and was a regular music contributor to The Stroumboulopouli. She is a fervent supporter of the Toronto live music scene. In a past life she was a teacher and Vice Principal in Durham Region. She has many more new and exciting projects waiting in the wings. ;)
RELATED ARTICLES
album reviews
8.0