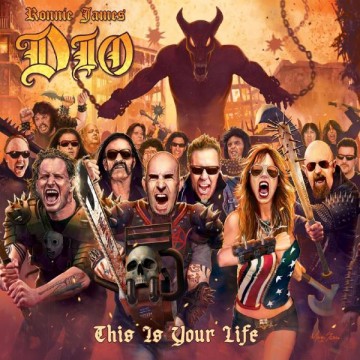 In honour of Ronnie James Dio’s incredible music career and immeasurable influence on heavy metal and hard rock, the best of today’s metal bands congregated to make an absolutely crushing tribute album that will immortalize RJD’s musical legend. This Is Your Life was put together by heavy metal royalty such as Anthrax, Rob Halford, Lemmy Kilmister, Hailstorm, Metallica, Tenacious-D and the list goes on. I truly had goose bumps on multiple occasions when spinning this release for the first time. The track “Rainbow in the Dark” featuring Corey Taylor of Slipknot on vocals seriously sets the tone for what’s in store on the album. It’s an absolutely CRUSHING version of the song with impeccable production value and stunning vocals. Tenacious-D’s version of “The Last In Line” is equally impressive, with Dave Grohl on drums and the mighty Jack Black on lead vocals. Black sounds as serious as a heart attack here, sidelining the comedy act and really delivering a vocal performance that would make RJD proud. Halestorm’s “Straight Through The Heart” is one of the highlights of the album, with singer Lzzy Hale absolutely destroying the mic and really making her presence felt with an untouchable vocal take. Killswitch Engage do a commendable version of “Holy Diver”, a big task taken on a by band that could easily handle such an epic song. After such great performances by the artists mentioned in the above tracks, I was rather unimpressed with Metallica’s contributions of Ronnie’s Rising Medley featuring “A Light in The Black”, “Tarot Woman”, “Stargazer” and “Kill The King”. A poor choice when they could have instead REALLY kicked one good song’s ass.

This is Your Life is HIGHLY recommended for any fan of Dio, Rainbow, Black Sabbath, Heaven and Hell and any other act RJD has associated with in the hard rock and metal world.

Andre has been writing for The Spill Magazine for over 12 years, dating back to the print days. His passion for music goes far beyond writing reviews for new music and live concerts, he is also an active musician and producer on the Canadian music scene. Having toured North America and Europe with various acts, he is no stranger to dedication and work ethic new bands must endure to make the grade in today's market; Andre always delivers perspective writing that is authentic and to the point. Mr. Skinner typically covers indie rock, grass roots, electronica and is our resident hard rock and heavy metal specialist. He is extremely selective on what bands he covers for articles and you can rest assured they are ALWAYS band to watch with something left of centre to offer.
RELATED ARTICLES
album reviewsvarious artists
8.0