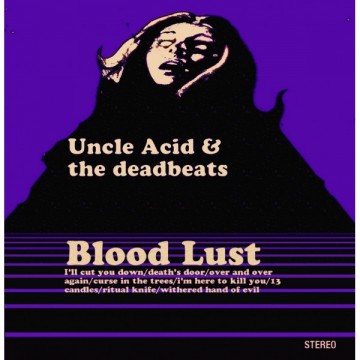 It’s been a while since I’ve heard deep and dark retro sounds from a modern Metal band. Uncle Acid and the Deadbeats sound like they were pulled right out of the early ’70s black magic era of Metal. Everything from the album’s cover art to the songwriting and dirty fuzz production take you back in time. There’s absolutely no doubt that this band can be compared directly to early Black Sabbath, Coven and Blue Oyster Cult. Uncle Acid’s super heavy two and three chord riffs usually break down with syncopated shots and breaks eventually leading the audience into heavy guitar solos that bleed out your ears. Bust out the old Westinghouse home stereo and crank this gem of a release!

Songs that rip include: “Death’s Door,” a slow-paced creep show with great harmonized guitars and vocals strategically intertwined with unsettling lyrics that will keep you turning in your bed with fears of the dark side; “13 Candles,” a dark deep groovy ritualistic jam about Satan and rituals of the calling. This track is pure evil, with nasty fuzz production to go right along with it. Next up we have “Ritual Knife” with its tribal drum beats and repetitive drone desert acid jams, this tune could have seen the light of day on a Black Angels record. Ritual Knife’s chorus is beautifully melodic keeping you hooked for more great tunes to come.

We’ll be hearing more from the great band, let’s just hope they stick around for another record or two. This album is a must for fans early dark Metal.

Andre has been writing for The Spill Magazine for over 12 years, dating back to the print days. His passion for music goes far beyond writing reviews for new music and live concerts, he is also an active musician and producer on the Canadian music scene. Having toured North America and Europe with various acts, he is no stranger to dedication and work ethic new bands must endure to make the grade in today's market; Andre always delivers perspective writing that is authentic and to the point. Mr. Skinner typically covers indie rock, grass roots, electronica and is our resident hard rock and heavy metal specialist. He is extremely selective on what bands he covers for articles and you can rest assured they are ALWAYS band to watch with something left of centre to offer.
RELATED ARTICLES
album reviews
9.0