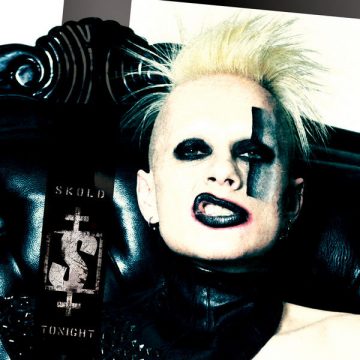 
My reaction when I first played “Tonight” was: ‘Wow, what am I listening to?’ This is when Tim Skold won me over. From Shotgun Messiah, through KMFDM to Marilyn Manson, Tim Skold finally comes back to his solo career after 15 years. The album is called Anomie, and it’s a return that fans of Metal, Glam and Rock should not miss. We can all hear sounds of Marilyn Manson Skold’s songs, not surprising since he has worked with Manson for seven years – time can’t pass without trace and without influence.

If you’re not a Metal fan do not let the cover halt you from listening to the single “Tonight.” It’s a powerful song, mixing Metal and Electronic sounds that has enthralled six different DJs, inspiring them to make their own remixes. Topping the list, my ultimate number one remix, is the Sum Revolution remix. Sum Revolution succeeds in grasping the tension and the dark side of the song, immersing the listener in the tune and capturing the subtle desperation that the lyrics bring.

The Album Version is definitely an interesting medley of the havoc that the lyrics carry combined with vigorous beats. The quick rhythm brings to the song some kind of verve that won’t let you stop dancing till it squeezes all the energy that’s left in you. The aim is to reveal with sound what words can’t, completing the message.

And the worst remix? Hard as I try, I can’t choose a winner between the iVardensphere cut, the Pull Out Kings remix, or the Rotersand rework. From a cockamamie Dubstep remix, which only made me want to press ‘next’, to a Club-dance track that urged me to take off my earphones, all I could hear was an amiss notion of the real song which has been tarnished because of someone’s lack of comprehension. So, do not waste your time.

With his new single, “Tonight,” Tim Skold wins the combat of proving that he still has a lot to show the world and his spring of creativeness has not yet dried.