SPILL ALBUM REVIEW: EVERY TIME I DIE – FROM PARTS UNKNOWN 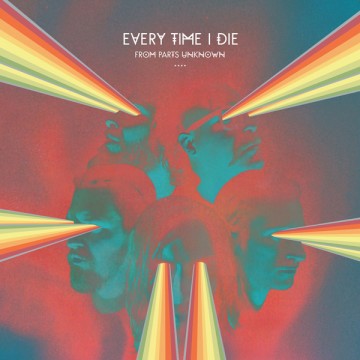 Every Time I Die
From Parts Unknown
Epitaph Records

Low expectations would not be among the most common prior to the release of Every Time I Die’s seventh studio album, From Parts Unknown.  All of the properties were in place for one absolutely flawless piece of work.  As of July 1st, all of the hype and attention that had been built up was released upon the masses in hard copy.   However, it’s likely that you had heard the album already.

Let’s step back to take a minute to appreciate what, exactly, this album is.  For those who don’t know, Converge has been well respected in the industry for the better part of 20 years now.  Converge guitar player, Kurt Ballou, had the pleasure of orchestrating this cultural masterpiece. Meanwhile, Every Time I Die prove once again, without a shadow of a doubt, that they are one of this generations most influential bands.  With their own personal brand of formaldehyde for today’s pop music, they shake the foundation and keep this scene on it’s toes.  The two forces are really quite remarkable.

The discomfort felt inside of Keith Buckley’s soulfully melodic tonal urges, act as a vice grip on a cog to ensure the tightest fit.   Some people have expressed disinterest in Keith’s singing and suggest that there is too much, or that it isn’t appropriate for the music.  Others disagree entirely and claim that it actually develops a darker edge within the music.  A handful of bands, that will remain nameless, have taken the road less heavy in their recent albums; ETID have not followed suit. Some say that the beauty in a great work of art is the initial ugliness and subsequent re-evaluation of your perspective. “The Great Secret” is, if anything, raw. From Parts Unknown is a beautiful train wreck.

To say the least, the boys done good. Easily one of the finest albums of the year.

Another classic for your collection.

SPILL ALBUM REVIEW: EVERY TIME I DIE – FROM PARTS UNKNOWN

Fearless and well-traveled journalist with a penchant for the truth.
RELATED ARTICLES
album reviews
8.0